During an election rally in Gujarat, Modi had alleged Manmohan Singh and other Congress leaders of colluding with Pakistan to defeat the BJP in Gujarat. Jatiley said in his clarification that was nowhere close to being apologetic, “PM in his speeches didn't question, nor meant to question the commitment to this nation of either former PM Manmohan Singh or Former VP Hamid Ansari, any such perception is erroneous, we hold these leaders in high esteem, as well as their commitment to India.”

Tweeting a video of Modi’s election remarks and Arun Jaitley’s RS clarification side by side, Rahul addressed the Finance Minister sarcastically as “Dear Mr. Jaitlie” and in an equally sarcastic tone, thanked him “for reminding India that Narendra Modi never means what he says or says what he means.”

Office of RG @OfficeOfRG
Dear Mr Jaitlie - thank you for reminding India that our PM never means what he says or says what he means.
#BJPLies 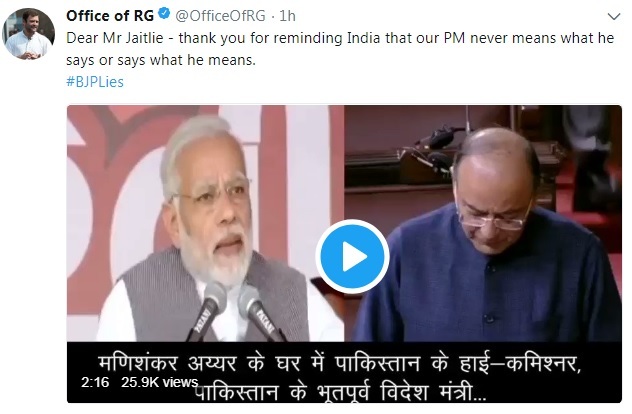 The remarks made by Modi created storm in Indian politics. Manmohan Singh reacted sharply on it and demanded an apology on what he perceived as Modi’s ill thought transgression, “I reject the innuendos and falsehoods as I did not discuss Gujarat elections with anyone else at the dinner hosted by Mani Shankar Aiyar as alleged by Modi. I sincerely hope that he will apologize to the Nation for his ill thought transgression to restore the dignity of the office he occupies.”

Congress launched a well mounted campaign to denounce it and made Modi’s apology a pre-condition to run the Parliament and with today’s compromise there seemed to be an end to the stalemate finally as Ghulam Nabi Azad, the Leader of Opposition in RS and a Congress MP, thanked Jaitley for his clarification “on what had been issue of contention” and also distanced his party from any comments made against Modi during the Gujarat election campaign.