The article originally appeared on India Today on 15 December.

The Federal Communications Commission (FCC), the telecom regulator of the United States of America, has repealed a landmark law the country passed in 2015 to ensure net neutrality in the US and Ajit Pai, a son of immigrant Indians, is at the centre of the debate. He heads the US FCC.

Pai is a Republican, the same party as American President Donald J Trump, and was made the FCC chief in January 2017, the same month the Trump administration took over the White House.

The FCC, the US equivalent of the Telecom Regulatory Authority of India (TRAI), has voted in favour of repealing a 2015 law enacted by itself under the Barack Obama government. The FCC is overseen by the US Congressional chairs and currently, like the US Congress (the American equivalent of Parliament), the Republicans are in majority in the FCC, a fact that helped the proposal moved by Pai score a 3-2 victory. Incidentally, Ajit Pai was appointed a commissioner in the FCC in 2012 by then president Barack Obama.

The move by Pai, whose FCC bio states that “consumers benefit most from competition, not pre-emptive regulation and regulators should be skeptical (sic) of pleas to regulate rivals”, has sharply divided America with critics saying repealing the net neutrality law will kill the spirit of free internet.

Critics argue that the repeal plan will benefit only few big telecom players who wield immense power over the flow of internet and telecommunication channels. Opponents of the repeal bill, named Restoring Internet Freedom Order, say it will effectively shut down or marginalise small players and will start a rush of predatory discriminating practices where one telecom company will try all to disadvantage a rival company’s data flowing through its cables.

And above all, internet users will be the ultimate losers with their freedom to get unrestrained access to all content and data gone, the critics add. Net neutrality, they say, ensures that no service provider will speed up or throttle a particular service because of its business interests.

Paul Ryan @SpeakerRyan
This is the right call by @AjitPaiFCC and the @FCC. The way to keep the internet free and open and protect consumers is to crack down on internet service providers that would abuse open access. http://spkrryan.us/2ATmdrF
11:49 PM - Dec 14, 2017 · Washington, DC 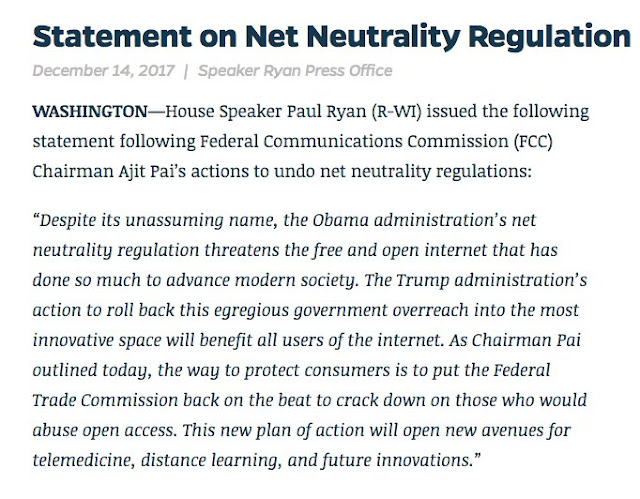 India has also been through this important debate. The country saw a major controversy over services such as Facebook’s Free Basics and Airtel Zero plans. These differential pricing plans were alleged to be discriminatory in nature as they would have given preferential treatment to content and data of a particiular telecom company or internet service provider (ISP).

Citizens here were up in arms over this and a public outcry forced the government and the TRAI to initiate consultations on building a framework to ensure net neutrality in the Indian market. And, its outcome has been positive so far with TRAI vouching to uphold the principles of net neutrality in recommendations it released last month.

Ajit Pai’s move is threatening to undo that in America, the world’s largest free market for the internet. Pai’s move has also unnerved the internet’s founding fathers Tim Berners-Lee and Vinton Cerf and many other internet pioneers including Apple co-founder Steve Wozniak and Mozilla’s Mitchell Baker.

They wrote an open letter to US Congress calling on it to cancel the proposed vote yesterday. They called the repeal plan flawed and an imminent threat to the internet.

But Pai was unnerved. He tweeted this morning to let the world know that there would be no change in his plans, “U.S. @SenateMajLdr supports @FCC plan to restore Internet freedom, saying our Internet economy is the “direct result of a bipartisan desire to create an environment of advancement-one that utilized a light regulatory touch.”

Ajit Pai’s parents were doctors. His mother was from Karnataka and father from Andhra Pradesh. They migrated to America where Pai was born in 1973 in Buffalo, New York.

A graduate from Harvard and University of Chicago Law School, Pai’s law career includes assignments mostly with the US judicial services and the US Congress in difference capacities as well as stints with private corporations like Verizon Jenner & Block.