My parents were travelling from ShivGanga Express (12559 – Varanasi to New Delhi) last evening. The train, considered the most important one between Varanasi and New Delhi, starts from the Manduadih station (MUV), one of the sub-stations of the Varanasi Railway Junction, at 7:40 PM and arrives in New Delhi (NDLS) at 8:10 AM the next day. And the thing is, its gets delayed daily. Okay, don’t get swayed by Indian Railways’ National Train Enquiry System (NTES) app on your smartphone or - https://enquiry.indianrail.gov.in/ntes/ - its desktop version.

They work overtime to do the damage control that has become synonymous with Indian Railways – chronic delays. Most of the time, they end up showing ‘earlier than real’ time of a train’s arrival. But this ‘jugaad’ hurts the Indian Railway’s misplaced pride even more. The network that has been busy fleecing passengers during some last years to increase its revenue, with measures like dynamic fare pricing as air carriers do or Premium Tatkal scheme that makes even a sleeper class ticket as expensive as AC-II or AC-III, has absolutely failed to meet the most basic need of any transport network – timely arrival and departure of trains. And mind you, most of this is due to its human network. The irony of all this is, you can easily find cheaper airfares for the same route than what some of premium trains offer.

And when even most of its premium trains routinely get delayed – including Rajdhani, Shatabdi and Duronto – we don’t need to do much data digging about the state of affairs with the superfast trains, like the one my parents were travelling from. And last evening and this morning were no different. The train usually starts getting late as it passes the Allahabad Junction. By the time the train arrives in Kanpur, already an hour or two late, it enters the phase where it adds up delayed minutes to its quantum quite regularly, so much so, that by the time it reaches in the catchment area of Delhi, it becomes a nightmare for passengers.

These are the snapshots of the NTES app this morning that show how Indian Railways takes us for a ride. The screenshots taken at 10:36 AM show the train is delayed by 2.21 hours and will reach Delhi by 10:31 AM. We can give the NTES benefit of doubt here as the site may take some minutes in updating the information. 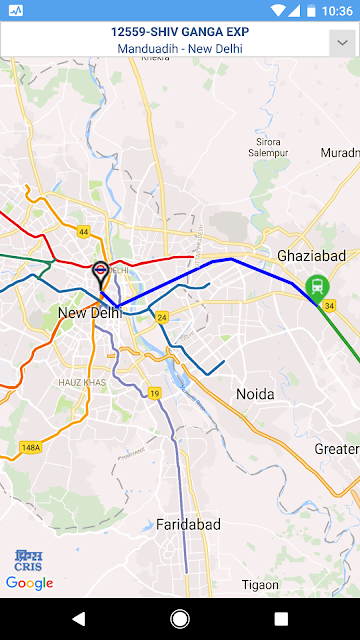 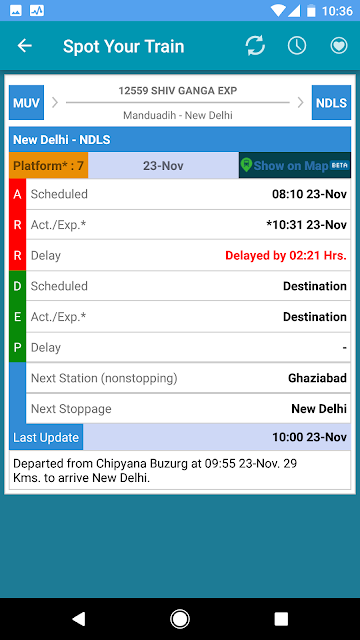 So I called my parents at 10:41 AM to confirm if the train had arrived so that I could ask the driver to approach them but what they told me, in turn told me, that the train was still hours away, even if it was just 15 Kms away from the New Delhi railway station. The train was just crossing the Anand Vihar Terminal. I again called them at 11:10 AM and they said the same thing, that they were still in the Anand Vihar area.

I again checked the NTES app at 11:13 AM. It was now showing the train was delayed by 2.48 hours with its expected New Delhi arrival at 10:48 AM. But here is this thing to see. This information on the NTES app was updated at 10:39 AM, 39 minutes after the last update at 10 AM as we can see in the screenshots but both show the same last station departed - 'Departed from Chipyana Buzurg at 9:55 AM 23 Nov. 29 Kms to arrive New Delhi.' So, in a sense, no real time update. The maps of the train route are also showing the same pointers. 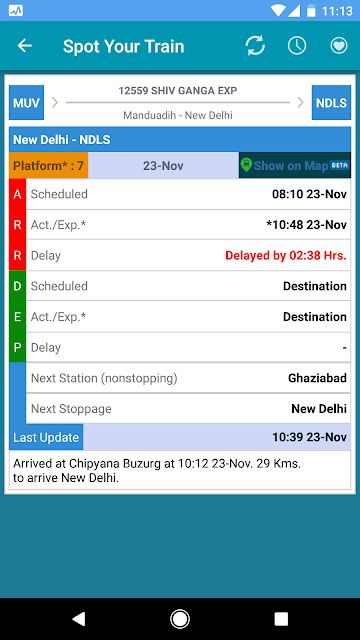 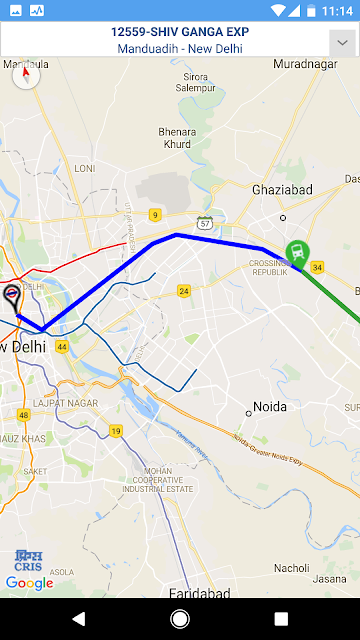 I again checked the NTES app at 11:24 AM. And bingo, this time it showed the train had arrived New Delhi at 11:05 AM (delayed by 2.55 hours). The information was updated at 11:18 AM. Keeping in mind the history of the NTES app for giving misleading information, I called my parents at 11:25 PM to confirm it. And guess what they said. They told me that the train was still standing at the Shivaji Bridge station, almost 1.5 Kms away from the New Delhi railway station. The train finally arrived at the New Delhi railway station at 11:37 AM, delayed by 3.27 hours. 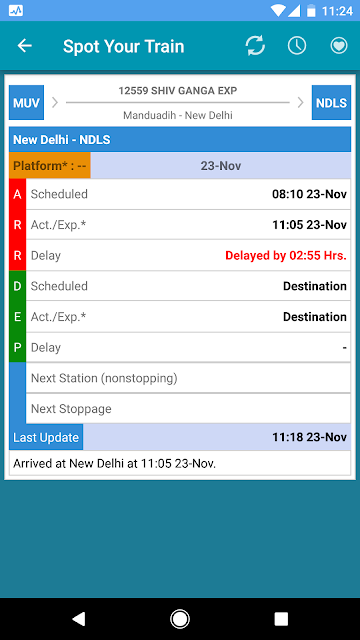