WE CAN’T SAY IF CORKER BEGGED TRUMP FOR MERCY..BUT WE KNOW TRUMP CAN SAY ANYTHING

We don’t know so we can’t say whether it was a Donald Trump day, as he has tried to convey - that Bob Corker, Republican senator from Tennessee, begged him for mercy, for his re-election next year.

A boastful Donald Trump tweeted to let the world know that “Corker begged Trump to endorse Corker for re-election in Tennessee as Corker could not win without Trump’s endorsement.”

Trump also reminded us that Corker was behind the horrendous Iran nuclear Deal and he wanted to be the US Secretary of State and how could have Trump allowed his re-election of such a person!

Now our good senses will question us, especially when it comes from a US president with historically low approval ratings rights from the initial months into the White House, with almost simultaneous analytical pieces and possibilities on his impeachment and so a big question mark on his re-election chances when the US electorate goes to elect its next president. 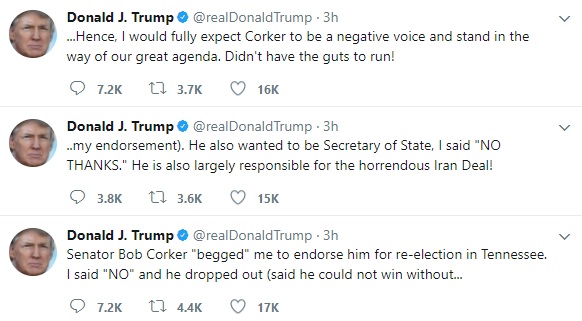 Also, as Bob Corker has been increasingly critical of Trump’s decisions, of his ways to handle the North Korean nuclear issue or the changes he has brought to US tax regime, and is expected to become even more critical in the days to come, and is an influential voice, a pre-emptive Trump also tried to set his course on offensive by saying that “he fully expects Corker to be a negative voice and stand in the way of his ‘great’ agenda.”

Now, whether Corker begged Trump for mercy or not only Corker can say but given the way Trump and his presidency have been, Trump and his vitriol can go on to say anything. Let’s see when Corker chooses to rebut the invectives.