US President Donald Trump has had consistently low approval ratings ever since inaugural of his government on January 20 this year. A latest approval rating (Marist College Institute of Public Opinion) released two days ago found 58 per cent of its respondents strongly disapproving the Trump Administration while another 20 per cent opined that Trump would be known as an average president.

Earlier, a poll result (Morning Consult) on October 18 had found Trump’s approval rating dipping in all of 50 US states, many of which he had won with large margins. At 37.8 per cent, Nate Silver’s FiveThirtyEight analysis shows Trump’s approval rating are still hovering around the crisis of being historically low. And this has been the case right from Trump’s first month in the White House. No authentic poll can found him on a good standing. Polls, in fact, have found him to be the least popular US president ever since such statistical practices began to keep gauge of them.

Another marker of people’s trust in Trump administration is the way it has handled the aftermath of three big hurricanes, Harvey, Irma and Maria. According to a CNN poll, a September poll found Trump rating at 64 per cent after Harvey and Irma but it drastically came down to 44 per cent after Maria hurricane which ravaged Puerto Rico and millions are still looking for proper rehabilitation, after a month the hurricane hit. Trump, in fact, was panned for his inhuman comments that he made multiple times on Puerto Rican debt when the residents of the US territory in the Caribbean were staring at

But like always happens, like Trump always dismisses such polls, and in fact anything and everything that criticises him, Trump again tweeted today to claim all such developments as fake news efforts and like he always does, tried to shield behind stock market or job creation figures though it is debatable how much of it is due to the efforts of his administration.

Donald J. Trump‏ @realDonaldTrump
Stock Market hits another all time high on Friday. 5.3 trillion dollars up since Election. Fake News doesn't spent much time on this!
6:14 AM - 21 Oct 2017

And people who dump Trump are right there, we can see them if we see the comment thread of Trump’s tweet. The first comment says the stock market has been “following the same trend for the past 8 years” while the next one thanks Trump’s predecessor Barack Obama for it, “When the stock market breaks the current trend-line that Obama started 8 years ago, then you can take some credit.  Until then, Thanks Obama!” The thread comment is full of views that Trump is bragging about something that ideally has been a trend for years and Trump has no claims to fame here. 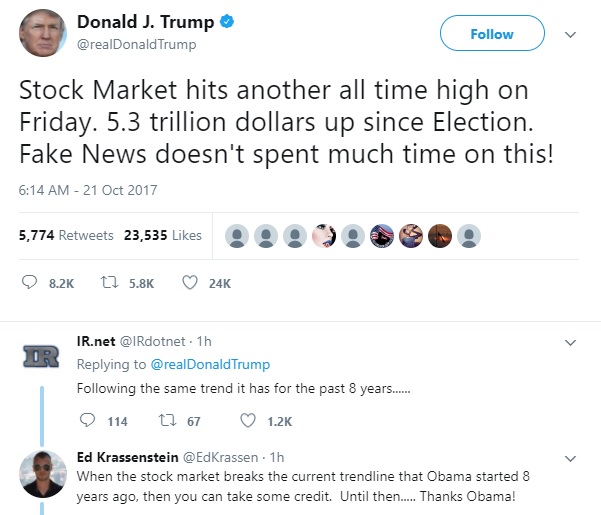