TRUMP WARNS KIM JONG UN, A MADMAN, WILL BE TESTED LIKE NEVER BEFORE

Kim Jong Un, the North Korean dictator, is a madman who doesn't mind starving or killing his own people, US President Donald Trump has concluded and therefore he will be tested and punished like never before. 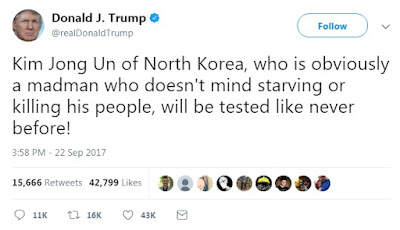 Donald Trump's warning came after Kim Jong Un lashed on him for his maiden United Nations General Assembly speech that spoke of totally destroying North Korea if it didn't fall in line. Trump said that denuclearization was the only acceptable future of North Korea and later on signed an Executive Order imposing more sanctions on the nation.

In response to Trump's warning, Kim described him as a gangster fond of playing with fire and displaying an unprecedented rude nonsense one had never heard from any of his predecessors.

He didn't stop at this. He further said that Trump was a mentally deranged dotard, a frightened dog who barked louder and North Korea knew how to tame him.

And like Donald Trump had warned North Korea last month that if it escalated nuclear threat, it  would be met with fire and fury like the world had never seen, Kim concluded that the North Korean fire would surely and definitely tame Donald Trump.
The government of the Rocket Man, another term invented by Donald Trump to describe Kim Jong Un after a series of missile and nuclear tests by North Korea, also warned that North Korea may soon detonate its most powerful hydrogen bomb yet over the Pacific.


Earlier this month, on September 3, North Korea had detonated a hydrogen bomb in its sixth and most powerful nuclear test to date and Pyongyang had warned of more ‘gift packages’ for Washington which came true when it test fired an intermediate-range ballistic missile over Japan on September 15.