US President Donald Trump, while speaking at the 72nd Session of the United Nations General Assembly in New York, reiterated his government's resolve to hunt down and kill terrorists wherever they are.

Reaffirming his government's resolve to fight terrorism he said, "We must deny the terrorists safe haven, transit, funding, and any form of support for their vile and sinister ideology and we must drive them out of our nations."

And then, in a clear warning again to nations harbouring terrorists, he said it was time to expose and hold responsible those countries who support and finance terror groups like Al-Qaeda, Hezbollah, Taliban and others that slaughter innocent people. Though not named here, the world clearly knows that Pakistan is indeed a safe haven for terror groups like Taliban and Al-Qaeda.

And like he had said just a week ago, speaking during the 9/11 Memorial Observance at the Pentagon, he repeated that the US and its allies were working together to crush terrorists and stop the re-emergence of safe havens

Donald J. Trump‏ @realDonaldTrump
It was a great honor to have spoken before the countries of the world at the United Nations.
#USAatUNGA🇺🇸#UNGA
https://instagram.com/p/BZPRctNg-5U/ 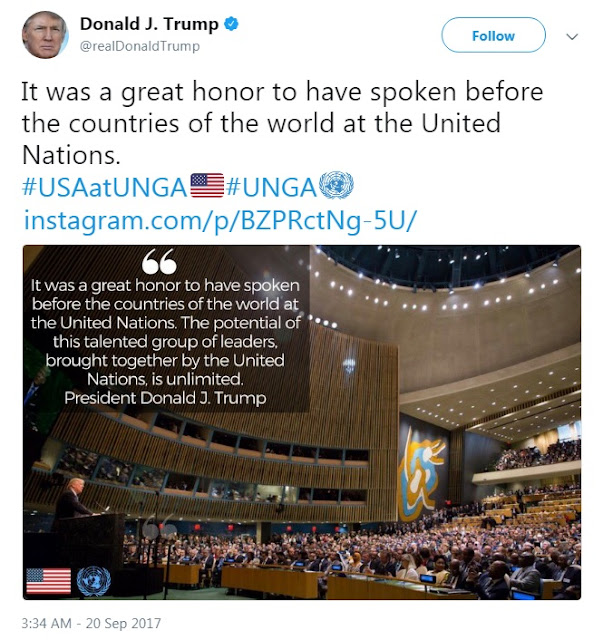 His Afghanistan policy, that he unveiled in July, found a place in his maiden UNGA speech. He said that from now on, the US security interests will dictate the length and scope of its military operations.

The US is disappointed and angry over Pakistan's double-dealings, the country that has been a major recipient of US financial aid, over $15 billion in just last five years.

While detailing his South Asia policy, Trump slammed Pakistan and warned that the US will no longer be silent about Pakistan's double-dealings. He demanded that Pakistan's attitude of doublespeak had to change immediately.

Pakistan was still reeling under the pressure of an increasingly demanding US to crack down on terror networks when another powerful bloc of countries, the BRICS, alluded to Pakistan to rein in the terror groups operating from its soil.

It was a double whammy for Pakistan because the censure came from a multilateral platform which had its all-weather ally China as one of founding members besides India, Russia and Brazil.


Trump's warning again, this time from the world's only organization with a truly global participation, the United Nations, should only add to that pressure, when he made his priorities clear in unequivocal terms that "the US will stop radical Islamic terrorism because it cannot allow it to tear up his nation, and indeed to tear up the entire world."