FACEBOOK TO HIRE THOUSANDS TO REVIEW SUICIDE AND CRIME VIDEOS

After spate of incidents where people went live on Facebook to commit murder or suicide or posted videos of their acts on their timelines, Facebook has decided to make its content monitoring and review team stronger by 3000 more headcounts.

According to a Facebook post of its founder Mark Zuckerberg, that he uploaded today, Facebook is working on to better its reporting system on such videos so that timely action can be taken to reach out to the people in need and such posts can be taken down immediately.

Zuckerberg wrote, "Over the last few weeks, we've seen people hurting themselves and others on Facebook -- either live or in video posted later. It's heartbreaking, and I've been reflecting on how we can do better for our community."

Zuckerberg writes that Facebook already has 4500 people in its community operations team that reviews the reports from around the world every week and 3000 more people will be hired to make the process faster and more efficient.


Just last week, in a murder-suicide case, on Facebook Live, a Thai man killed his daughter by hanging and then committed suicide and the content was available on Facebook for 24 hours. Around the same time, on April 25, an Alabama man shot himself while on Facebook Live after breakup with his girlfriend. Last month, a man killed an elderly in Cleveland and uploaded its video on Facebook. In October 2016, a Turkish man shot himself to death while live of Facebook after breakup with his girlfriend. 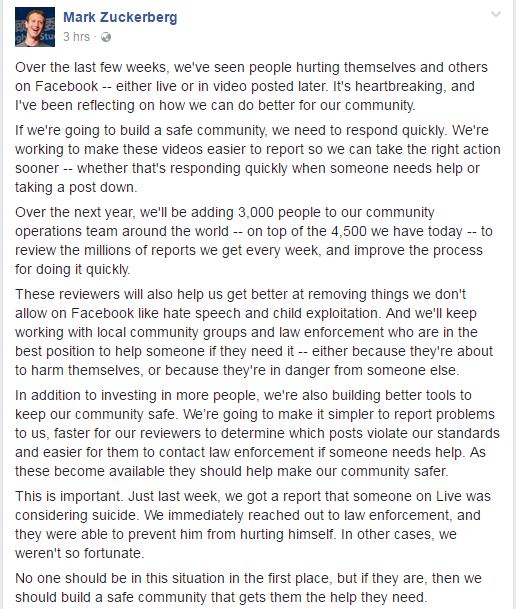 ©SantoshChaubey
Posted by Santosh Chaubey at Wednesday, May 03, 2017