How rattled is the Chinese media on the Dalai Lama’s Arunachal Pradesh visit is visible from the flurry of threats, warning and even advices that are appearing in its official publications. After calling India’s stand on the Dalai Lama’s Arunachal visit an undignified and obstinate stand damaging to the India-China bilateral ties or summoning the Indian envoy in Beijing to lodge its protests, it is now the Kashmir issue that China has threatened to rake up.

A latest editorial in China’s official publication Global Times that has been at the forefront of anti-India tirade on the Dalai Lama’s Arunachal visit, warns India that the use of the Dalai Lama card is ‘tactless’ and at the same time, threatens to use the Kashmir card against India.

While repeating the oft quoted patronizing tone of the official Chinese publications that how big and powerful China is, militarily and economically when compared to India, the editorial writes, “With a GDP several times higher than that of India, military capabilities that can reach the Indian Ocean and having good relations with India’s peripheral nations, coupled with the fact that India’s turbulent northern state borders China, if China engages in a geopolitical game with India, will Beijing lose to New Delhi?”

But China is already playing the Kashmir card against India with its ambitious China-Pakistan Economic Corridor (CPEC) project that passes through Pakistan-occupied-Kashmir (PoK). India considers PoK as its integral part and has lodged strong protests over the Chinese presence in PoK but the CPEC is going ahead in full steam. Here, China goes on bulldozing, mutilating India’s sovereign claims in PoK, but starts making overtures when it comes to even an innocuous Dalai Lama visit to Arunachal Pradesh, that China considers a disputed territory even if the Indian position has been clear to the world that the state is an integral part of India. China expects India to respect its sensitivities, but conveniently forgets to do the same when it comes to the Indian sensitivities.

The editorial, like a doublespeak, writes that the Indian concerns on China blocking India’s entry in the Nuclear Suppliers Groups (NSG) or China vetoing proposals in the United Nations to ban Masood Azhar are international multilateral issues while ‘the Dalai Lama is purely a China’s domestic issue’.

Well, to remind the Chinese strategists writing such doublespeak editorials here that even Masood Azhar is a pure diplomatic issue for India because India has been facing terror acts of terrorists like him or Hafiz Saeed for decades while they have been under patronage of Pakistan and even now China. China’s obstinate stand on Masood Azhar validates it.

It is India’s unchallenged right to hunt down or corner such terrorists and if China considers India as a friendly neighbour and partner, as the editorial says, then it should, in fact, come forward and help the Indian efforts to ban terrorists like Masood Azhar and should put pressure on Pakistan, India’s pestering neighbour that claims to have brotherly ties with China, to stop sponsoring terror in India.

But no. While the Masood Azhar issue is a technical one for China, the Dalai Lama issue is such that ‘India’s attitude towards the Dalai Lama almost affects the entire relationship with China’, the editorial writes.

This screenshot from the Global Times tells us how obsessed and rattled China has been over the Dalai Lama’s Arunachal visit where ‘India’s Dalai invites’ figure’s among the hot topics. 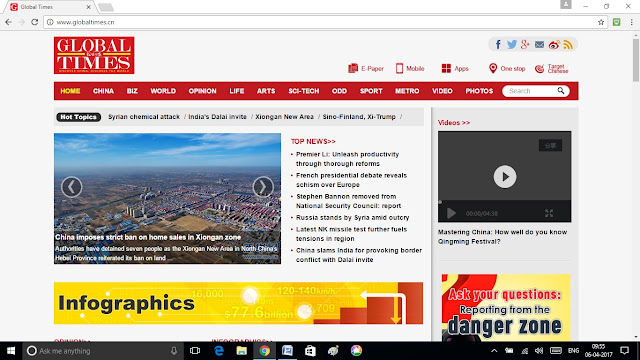