It is in typical Arnold Schwarzenegger and Donald Trump way, two big names of American politics and showbiz, in their never-say-die spirit of making comments and hitting back.

Speaking at the National Prayer Breakfast this morning, Donald Trump took a jibe at the Hollywood star and former Texas Governor who said Trump's travel ban was a crazy idea and had made American look stupid before the world.

In response, continuing his January barrage, Trump mocked The Terminator star again for the low rating of Celebrity Apprentice, a reality TV show Donald Trump hosted earlier. He said that the show has seen consistently low ratings after Arnold took over as its host and its producer will never bet on him again. A report in The Hill wrote quoting Trump, "They hired a big, big movie star, Arnold Schwarzenegger to take my place, and we know how that turned out. The ratings went right down the tubes. It's been a total disaster. And Mark [Burnett] will never, ever bet against Trump again, and I want to just pray for Arnold, if we can, for those ratings".

Arnold Schwarzenegger, an Austrian migrant turned US citizen immediately hit back saying it would be better if Trump and he could switch their jobs. In a video posted on his Twitter timeline, Schwarzenegger took a jibe on Trump saying "Hey Donald I have a great idea. Why don’t we switch jobs. You take over TV, because you’re such an expert in ratings, and I take over your job. And then people can finally sleep comfortable again."

Arnold's spokesperson also issued a statement, sent to ABC News which said Trump has historically worst approval ratings and he should work on that instead. 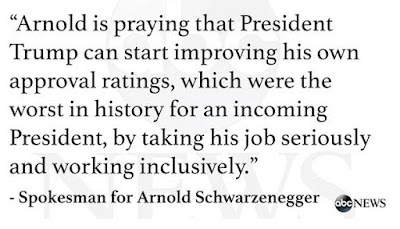 Last month, boasting his performance at the show, Trump had likened himself as the 'ratings machine DJT' and had claimed that 'Arnold Schwarzenegger who had replaced him as the host of the show had got swamped'. He implied that there was no comparison between him and Arnold even if Arnold was a big movie star. But as his words indicate, the real reason for a Trump dump for Arnold lies in his support for Hillary Clinton and John Kasich, Trump's political rivals.

‏@realDonaldTrump
Wow, the ratings are in and Arnold Schwarzenegger got "swamped" (or destroyed) by comparison to the ratings machine, DJT. So much for....
6:04 PM - 6 Jan 2017

‏@realDonaldTrump
being a movie star-and that was season 1 compared to season 14. Now compare him to my season 1. But who cares, he supported Kasich & Hillary
6:12 PM - 6 Jan 2017