US President-elect Donald J. Trump is now the US President Donald Trump. He was sworn in this afternoon as the 45th US President, taking over from his predecessor Barack Obama. He is one of the most controversial people in the US history to move the White House because of his background and the values that he looks to espouse.

He looks comfortable in his skin, a flamboyant but controversial businessman, be it his divisive and derogatory campaign rhetoric or his days since November 8, 2016 when he stunned not just America but the whole world by registering an impressive victory over his Democratic rival Hillary Clinton, former First Lady and the US Secretary of State.

His campaign rhetoric and post-election remarks have stirred the whole world and people the world over are waiting to see how he is going to handle his Presidency once he settles in the White House, because creating a mess around any of the issues that he has so casually talked or tweeted about can turn the whole world or a large section of it upside down.

Donald Trump has ratcheted up war and nuclear rhetoric to newer heights. US is considered the big daddy when it comes to enforcing international non-proliferation and disarmament measures but Trump’s campaign rhetoric and his post election words have instilled a fear that the world could see a renewed race for arms among the most powerful nuclear nations of the world, especially the US and Russia.

The world cannot easily forget the ominous tweet by Donald Trump post his victory in the US presidential polls where he asserted that “the United States must greatly strengthen and expand its nuclear capability until such time as the world comes to its senses regarding nukes”.

After a growing global debate and Chinese displeasure, Trump’s transition team issued clarification that it was just a courtesy call. But nothing is seen as casual or ‘by-chance’ in geopolitics. The rift has deepened further with Trump’s recent statement that the One China Policy is open for negotiation.

Jerusalem is contentious. Both Israelis and Palestinians consider in their capital. Though it is where Israel’s power corridors are, no embassies are here but in Tel Aviv because doing so would compromise the peace process and would damage the prospects of the ‘two state’ solution beyond repair. Moving the US Embassy to Jerusalem has been a campaign rhetoric in the US Presidential polls. It never went beyond that.

Now, like his Taiwan move, Trump says he doesn’t break promises and will move the US Embassy in Israel from Tel Aviv to Jerusalem. Protests have begun against it and if Trump’s designs materialize, it will force an entire region in flames again, something that even many Israelis are not in favour of, even if the Israeli leadership is encouraging it. A New York Times report writes, “It would only set off new fighting with the Palestinians as well as the rest of the Arab world, a big price tag for a symbolic change that would hardly move the ball on the broader conflict”.

Trump’s campaign and his transition team have been harsh on immigrants and minorities. He has not desisted from issuing offensive statements against immigrants including Muslims, Black Americans and racial minorities. They talked of creating a Muslim Registry to humiliate them even further. His election saw protests not just in America but in many other parts of the world. Before and after his election, Trump has made clear his intention to build a wall along the Mexican border using choicest of words for Mexican immigrants.

The world had never seen society in the US so divided, at least in decades, since the days of segregation and counterculture. Okay, there is always this division, a group chooses this, the other one goes for that, but this all is at an electoral level. What happened in the US after Donald Trump’s victory is suggestive of deep fissures in the US society that Trump likes to flare up even if he talked of a united US society today – of Black, Brown and White Americans. After Trump, people are fearful of rising White supremacist tendencies in the US society.

If things really go out of control as the scenario looks now, its repercussions would be seen across the world because US has been a cosmos of ethnicities from across the world.

The World Economic Forum’s annual meeting was held in Davos from January 17 to 20. China tried to make a big presence there this time but the whole Chinese focus revolved around sending Trump a message that protectionist approach would lead to trade wars which would hurt everyone. Targetting increasing anti-globalisation, Chinese President Xi Jinping reminded Donald Trump and the world that “no one will emerge as a winner from fighting a trade war” and that China would pitch in to counter Trump’s moves.

Donald Trump has threatened to create protective barriers to stop businesses and jobs moving out of the US. He has been a harsh critic of outsourcing and the US under him would potentially see a much declined numbers of professionals heading towards the US. He has vowed to impose tariff barriers to check inflow and outflow of goods in the US.

Trump’s plans to go ahead with his promises took a large part of his inaugural address today. He said, “We have spent trillions and trillions of dollars overseas while America’s infrastructure has fallen into disrepair and decay. We’ve made other countries rich, while the wealth, strength and confidence of our country has dissipated over the horizon. But that is the past. And now, we are looking only to the future. Every decision on trade, on taxes, on immigration, on foreign affairs will be made to benefit American workers and American families. We must protect our borders from the ravages of other countries making our products, stealing our companies and destroying our jobs. Protection will lead to great prosperity and strength. I will fight for you with every breath in my body and I will never ever let you down”.

The Trump era begins now. He is officially now the most powerful person on the Earth. Let’s see where his domestic and geopolitical priorities take us. Trump says “the time for empty talk is over. Now arrives the hour of action”. Indeed! 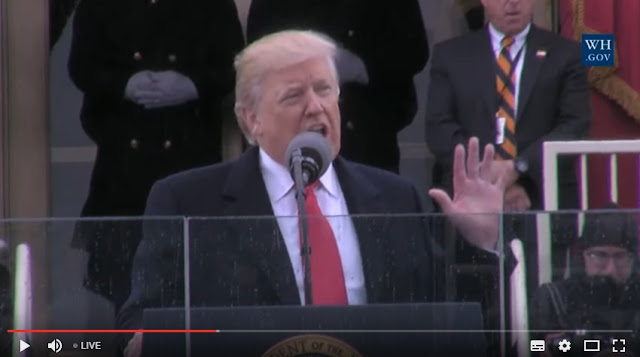