TRUMP EFFECT: US NAVY LOOKING FOR BIGGEST EXPANSION SINCE THE COLD WAR DAYS

According to an Associated Press report, the US Navy, emboldened by the remarks made by Donald Trump, the US President Elect, has revised its expansion plans to make it the biggest such exercise since the Cold War days.

Trump has advocated to build new fleets to address the potential threats from Russia, with a more powerful than ever Russian President Vladimir Putin and from China, with Xi Jingping emerging as the most powerful Chinese President since the days of Mao Zedong and Deng Xiaoping. Both of these leaders have successfully exploited nationalist segments in their respective countries to build their credentials as strong nationalist leaders and they base their foreign policies on the contours of their images cultivated back home.

The AP report says that ’emboldened by the promise, the US Navy has revised upward the number of ships it needs to 355, more than the number used by Trump during his election campaign’.

“The proposal calls for adding another aircraft carrier, 16 large surface warships and 18 more nuclear-powered attack submarines, among other ships”, the report says. Though there are questions being raised on funding this expansion that is expected to cost additional $5 billion to $5.5 billion annually, with backing from the US President, it should not be a problem.

Donald Trump has ratcheted up war and nuclear rhetoric to newer heights. US is considered the big daddy when it comes to enforcing international non-proliferation and disarmament measures but Trump’s campaign rhetoric and his post election words have instilled a fear that the world could see a renewed race for arms among the most powerful nations of the world, especially the US and Russia. The world cannot easily forget this ominous tweet by Donald Trump post his victory in the US presidential polls.

‏@realDonaldTrump: The United States must greatly strengthen and expand its nuclear capability until such time as the world comes to its senses regarding nukes 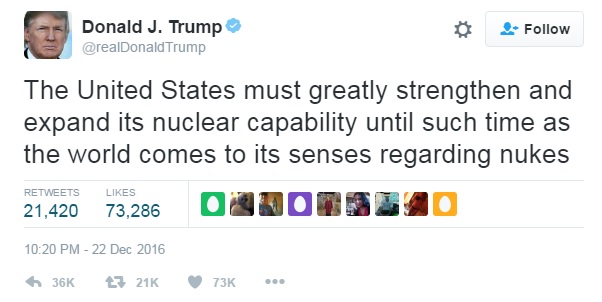 On the same day, Russian President Vladimir Putin thumped his chest about the Russian advances in Syria and Ukraine and proclaimed that Russia needed more and advanced nuclear weapons.