TIME PERSON OF THE YEAR: FROM A MERE JOKE, IT IS NOW A 'GREAT HONOUR' FOR DONALD TRUMP

The article originally appeared on India Today.
Here it is a bit modified and extended.

US President Elect Donald Trump is an elated soul. Success and fame is coming rapidly his way. After winning the US Presidency last month in a stunning upheaval, he has been elected as the 2016 TIME Person of the Year (POY), a recognition that is considered a global benchmark.

And Trump has expressed his happiness calling his POY title as a 'great honour' which means a 'lot to him'. According to NBC New York, Trump said, "It's a great honour, it means a lot. Especially me growing up, reading TIME magazine, it's a very important magazine. I've been lucky enough to be on the cover many times this year and last year."

Though he is yet to tweet or issue an statement or react in detail, how excited he was by this proposition becomes clear from his tweet that announced that he would be interviewed on the NBC's Today show where the TIME POY 2016 was to be announced, especially when the rumour mills said that he was the choice. In TIME 2016 POY Shortlist announced on NBC's Today show broadcast on December 7, Donald Trump was among the 11 candidates including India's prime minister Narendra Modi who has won the TIME POY Popular Vote second year in a row.

But when we look at Donald Trump's vitriolic views on the TIME magazine in past, this sudden change of heart looks as shocking as his victory in the presidential polls. If we see those comments, Trump's reaction today sounds like a plain lie.

In past, he has been critical of the TIME magazine using words like it 'looks flimsy, like a free handout at a parking lot' or callings its list of 100 Most Influential People a joke and stunt.

Donald J. Trump @realDonaldTrump
Just took a look at Time Magazine-looks really flimsy like a free handout at a parking lot! The sad end is coming-just like Newsweek!
6:20am • 2 May 2013 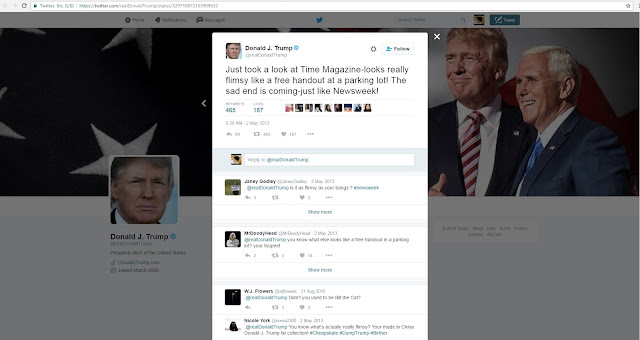 Donald J. Trump ‏@realDonaldTrump
The Time Magazine list of the 100 Most Influential People is a joke and stunt of a magazine that will, like Newsweek,soon be dead. Bad list!
9:24 AM - 27 Apr 2013 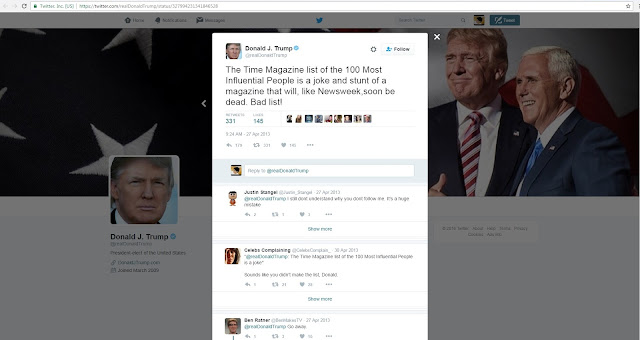 Or criticising the magazine for ignoring him like the last year when TIME chose German Chancellor Angela Merkel over him. He had then tweeted to let the world know that though he was a 'big favourite', the magazine instead chose a person who was ruining Germany.

Donald J. Trump @realDonaldTrump
I told you @TIME Magazine would never pick me as person of the year despite being the big favorite They picked person who is ruining Germany
7:23 PM - 9 Dec 2015 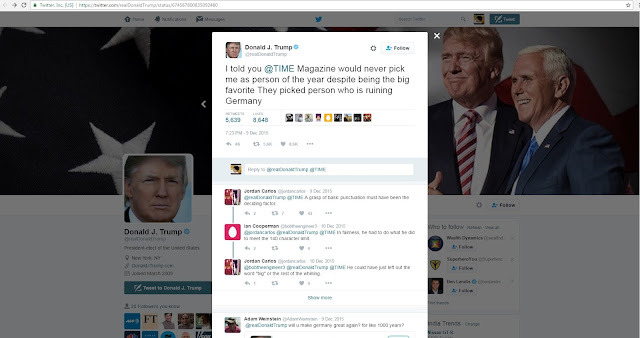