DEMONETIZATION MUST NOT END UP LIKE JUST YET ANOTHER POLITICAL ISSUE

The whole country is trapped into the demonetization debate.

Like always, there are many who are caught in the grey zone.

The trial and error juggernaut is marching ahead and it has been a mixed report for the government so far - in giving people their hard-earned money - in new notes and in old notes.

And this trial and error nature of it has given the political opposition a golden chance to score some brownie political (and electoral points in the season of state assembly elections) points by trying to corner the government. For them it is an illegitimate force and they have left no stone unturned in spreading this notion.

And what about people - commoners like you and me?

Well, either they don't matter or if the systems looks taking care of them, it is like it is extending some sort of favour.

It is said that the common man is the basic entity of a democracy and the processes of a democratic nation should revolve around him.

But we live in the times and in a society where the common folks - people like you and me - are only given some value or hearing when either there is a massive civil agitation like Vinoba Bhave or Lohia or JP or Anna Hazare could do or when there is some court pressure - as we see from time to time - in enacting pro people laws - in interpreting the existing laws to prevent their misuse - even in bringing erring elitist people or organizations in line - like we are witnessing in the BCCI case.

There are many who are complaining. There are many who are resolutely supporting it. They are commoners like you and me. Like always, they must not be duped by our political establishment because they are supporting this demonetization drive in spite of massive inconvenience it is causing - hoping there will be fundamental changes to their lives after it - once the things start settling down.

And stakes involved here are enormously high - specially after reports of many deaths in bank/ATM queues.

The government needs to answer them - and to them who are complaining - because they own it - and they own the processes on every stage. If they are compromising, the government must also compromise to become sensitive to them.

Demonetization must not end up like just yet another issue to play politics. As the government has promised, it must do the promised cash clean-up to filter out Black Money from our lives. 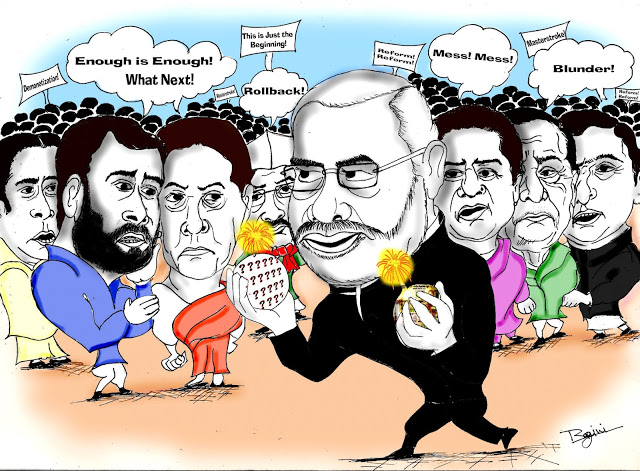