AS IF DYLAN NEVER CARED FOR A NOBEL.

I broke the Literature Nobel to Bob Dylan news at my place and soon it got the traction that was expected. 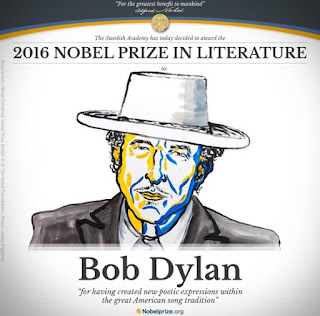 And it was a decision that sounded perfect - and it, indeed, was perfect - because Bob Dylan is a cultural doyen, a counterculture icon and a living legend not just in the US - but across the world. (We will happily forget those criticisms based on grudges and nudges of some who thought what Bob Dylan was creating could not be seen as literature). So the first reaction that came was:

As is natural to me, I wrote some pieces on Dylan, focusing on his India connect and the Literature Nobel for what he is. Being an Indian, I have had interest in knowing 'why and how' of the India connect of everyone who visits India more or less for similar reason - its spiritual treasure and the solace of nature it provides to such souls (like Sorensen, Leary, Jobs, Dylan or even Zuckerberg).

BOB DYLAN ABOUT INDIA
ROW OVER A JUSTIFIED LITERATURENOBEL TO BOB DYLAN: AND WHAT ABOUT CHINUA ACHEBE?

A Nobel to him again pushed me to know more about his India visit and connect, but despite best of my efforts, I could not get much - as would happen every time. What was different this time was the approach that I took. In an age of social media, I thought to get in touch with Dylan directly to see if I could some first-hand help from the person who was centre of my efforts. So I tweeted:

And then there is another angle to it. Though I know it is not even remotely related, I would like to feel so, because gives you a direction (even if it may be non-existent) :).

Bob Dylan has not acknowledged his Literature Nobel yet. The Nobel Prize committee after five days of consistent efforts abandoned its exercise but Dylan remained incommunicado (for them). While he held concerts and events where others lauded for him for his Nobel (but he looked like he didn't notice it). He also unveiled his 'permanent work of art for a public space' according to a Daily Mail report.

As if he never cared for a Nobel. (Now may be different reasons for it that a reticent Dylan would never speak about.)