MOTHER’S WORDS ON A TEACHERS’ DAY

“I never forget an opportunity I had in visiting a home where they had all these old parents of sons and daughters who had just put them in an institution and forgotten maybe. And I went there, and I saw in that home they had everything, beautiful things, but everybody was looking towards the door. And I did not see a single one with their smile on their face. And I turned to the Sister and I asked: How is that? How is it that the people they have everything here, why are they all looking towards the door, why are they not smiling? I am so used to see the smile on our people, even the dying one smile, and she said: This is nearly every day, they are expecting, they are hoping that a son or daughter will come to visit them. They are hurt because they are forgotten, and see - this is where love comes. That poverty comes right there in our own home, even neglect to love.”
From the Mother’s Nobel Lecture - December 11, 1979

There is this place that I visit regularly and the Mother’s these words echo on what I feel there during each of my trip.

This one is a paid home for the senior citizens, the old-age people who are forced to live there (and in every such home, paid or charitable).

Yes I can use the word ‘forced’ because no one wants to live away from his or her family when he or she needs it the most, in old-age, when they become dependent on others, financially, medically and emotionally and this dependence increases as the age advances.

Here in this particular old-age home, financial constraint is not an issue except one or two members because most are well-to-do traders or pensioners with good financial background, but overall, each of them are poor emotionally, as the Mother’s words say, as the practical needs of an old-age demand, the emotional attachment and attentions, they need people to spend time with them, to listen to them, to care for them, and that is universally true, at least in the context of the Indian tradition where the whole family still grows together, where the parents forget their own comforts, comfortably and happily, to give a comfortable life to their children.

And such old-age homes reiterate the concerns on the value-erosion that is breaking people away from the joint-family tradition where even fathers and mothers become unwanted entities.

Here in this old-age home, even if the situation is like other worldly when we compare it with similar government run institutions or many charitable ones, this poverty transcends. It begins with the families. The poverty there pushes them to throw their elderly parents away to such institutions, the eternally emotionally poor places.

And it can be read on their faces.
Yes, the grandpas and grandmas here are fully aware of their situation and the lifelong learning and bad experiences from their own children make them tolerant enough to pass the days in their solitude.

It is always an unacceptable point that a son (daughters are not privileged to take such decisions in Indian societies) cannot accommodate his parents or his father or his mother in ‘his family life’.

Peace always evades them and their sons and daughters live in a world of fallacy, of a caricaturized peace, earned on the sobs and tears of their parents.

Some of them had come here together. They saw here one departing. And they are now alone. Relatives including the immediate family members, including the sons and the daughters (if some of them turn up) come for the last rites and then it is even more solitary and haunting a life where the only person with whom he or she could share the emotional needs, is no more.

And the institution here, the old-age home, with good infrastructure and material facilities, is no help either. There is no emotional connect. The basic requirement of such an institution, catering to the emotional needs of the humiliated hearts, is totally absent. The staff there treats them as paid inhabitants who don’t give tips.

Most of the charitable institutions (and yes, this old-age home is one from the lot) don’t even know what charity should be, where should it begin and that there is no end to it, as the Mother’s life and words teach us to follow.

The value-erosion is deepening as evident by such institutions proliferating across the country. And there is no defined solution to address it.

The major reason behind such ‘extremely nuclear’ families is an increasingly selfish and self-centered work culture shaped by an education system that forces students to become too individualistic in competing and succeeding.

The value-based education system has been replaced by a system that focuses only on examinations. It tells students to compete and succeed at all costs. It tells them there is no life beyond it if they fail. The students are bullied by life and by the society.

They live under consistent pressure and after a point of time, they start treating genuine concerns and advices of their parents as bullying and selfish acts. They stop seeing the fine print of their parents’ intentions. They justify the family assistance as their right, something that their parents enjoyed as well when they were youngsters.

Not all sons and daughters become like that. But the increasing number of old-age homes tells us the problem is widening and the society needs to address it.

A logical way to address it is introducing  value based content focusing on parents and caring for them in the teaching curriculum right from the elementary level and continue the flow year after year till the undergraduate level. It is not a wild thought to opinionate that a separate course should be developed on family values in Indian societies. If there is a need of value-indoctrination in the Indian tradition, it is here, on this and similar issues.

Due to certain reasons, my visits to this old-age homes has become more frequent these days and thoughts on these lines naturally came to me today, after watching prime minister Nadrendra Modi’s address and interaction with the students from across the country emphasizing on the ‘value of values’ on the Teachers’ Day, a day to observe the birth anniversary of the greatest academician India has ever had, Dr. Sarvepalli Radhakrishnan, the former President of the nation and a former vice-chancellor of my alma mater, Banaras Hindu University.

‘Who we are is not decided by our lineage’ but by our deeds and when we fail to perform on our primary responsibilities, that is to our parents, to care for them, to be with them on their every call, we fail in life, even if we amass great material wealth.

Dr. Radhakrishnan had said: “We are Braahmin not on account of birth or the performance of rites, not by study or family, but on account of our behavior”.

Growing up is basically about the values that we imbibe and how the values reflect in our acts. The sons and daughters who don’t learn to appreciate and imbibe the values that make the connect with their parents a natural bond remain poor throughout their lives – as the Mother’s words say, as the life says, as echoed in Dr. Radhakrishnan’s words – “Their joy is in the fulfilment of family obligations of marriage and parenthood, and other personal relationships.” 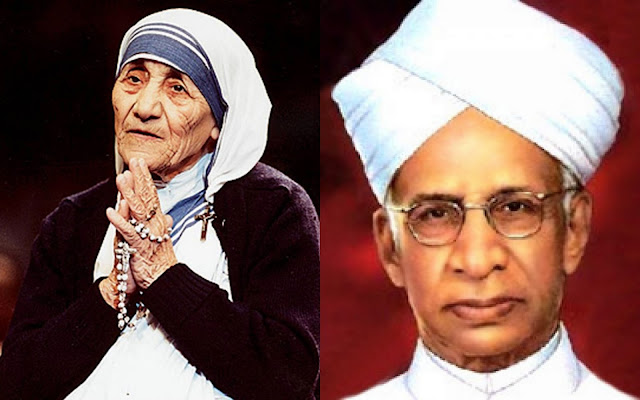