Mother Teresa will be canonized tomorrow at the Canonization Mass held by the Vatican. The Mass is scheduled to begin at 10:30 AM local time (2 PM Indian time). Over 100,000 people are expected to participate. According to Mother Teresa’s official website, different programmes towards the Sainthood of Mother Teresa will be organized for a week that began on September 1. The whole world, especially Mother Teresa’s followers and India is looking forward to witness this moment because India has been Mother’s land of Karma. Prime minister had mentioned it is in his monthly radio address Mann Ki Baat and an Indian delegation led by foreign minister Sushma Swaraj, that included Mamata Banarjee and Arvind Kejriwal, will represent India during the ceremony.

But if there are many who see a saint in Mother Teresa, there is a section that has made it the primary task to tarnish Mother Teresa’s image. They have written books. They keep on giving interviews and addresses that present Mother Teresa as some dogmatic religious fanatic whose main concern was religious mission and Catholicism spread and her humanitarian work just a façade for it. They raise fingers on absence on the financial accountability of her organization, Missionaries of Charity. They question poor and unhygienic practices being adopted in the houses for the dying started by her and now run by her order.

Yesterday, while looking for some information on Mother Teresa, I came across a strange development. The links that the Google search returned with had the Wikipedia page on Mother Teresa at top and, as happens, its summary was given in the corner. As we can see in this screenshot taken yesterday (September 2, 2016), that Mother Teresa was from Spain and she born and died there in the 16th Century. The screenshot says, quoting Wikipedia, that Mother Teresa was born on March 28, 2016 in Spain’s Gotarrendura and she died on October 4, 2016 in Alba de Tormes, again in Spain. But the initial three lines of the article is about Mother Teresa from Calcutta only who was born in Skopje, Macedonia, then part of the Ottoman Empire. 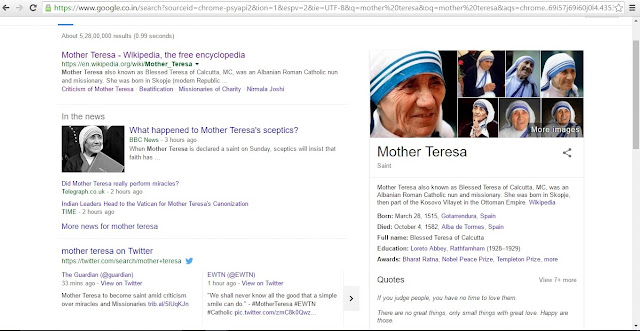 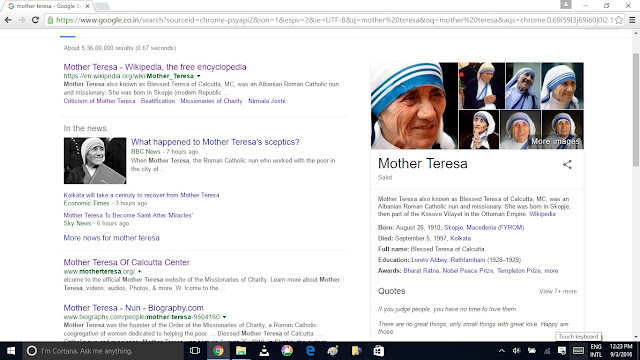