September 29 morning brought us the biggest newsbreak of decades and the proudest moment for every Indian. After Pakistan's cowardly strike, India has struck back and true to its growing global reputation, has owned it before the world.

Indian Army has gone 3 kms deep into the Pakistan-occupied-Kashmir territory, a disputed area that is under the intense cover of bayonets and AK47s of the Pakistani army and terrorists, has carried out surgical strikes on six terror launch-pads with perfect precision, killing dozens of terrorists and some interfering Pakistani soldiers, has inflicted heavy damage, and has come out with flying colours. And with no damage, no casualty.

And India, like a responsible member of the world community, has owned it, informing Pakistan and the world community that it has carried out these surgical strikes, even if many of them were still pushing us to go for talks to a backstabbing nation that has always worked to bleed us, including the latest Pakistan sponsored terror strike at the Indian Army base camp in Uri. We lost 19 of our soldiers in an act of cowardice since most of our soldiers were sleeping. Yes, there were lapses, but the Army has avenged it and in style – and with substance.

Ever since the attack, Pakistan and its leaders are in a state of shock. And it initially reflected in their state of mind, speaking in different and incoherent voices. After the surgical strike, they initially didn't know what to do and what to say. Pakistan’s prime minister Nawaz Sharif said it was an act of ‘naked aggression’ by the Indian Army. Its defence minister Khawaja Asif initially said yes there were such incidents over the night but if India did so again, we would give a strong reply. So they admitted the surgical strikes. In fact, many from the Pakistan's political establishment said things on these lines.

But how these versions changed with Pakistani army's diktat shows the chaos India's move caused - with foolishness and boorishness defining the thinking process of Pakistan's ruling elite.

Since its all powerful army has denied (or desperately tried to downplay - to save its face) the surgical strikes move by India, the whole Pakistan is now trying to toe the line away from what its prime minster and defence minister had said initially. They say no surgical strike took place and it was a mere Line of Control (LoC) aggression.

But the body language of Pakistani politicians and the meek response of its Army show that the realization that India would strike back has come as a rude shock and they are in a state of disarray on how to respond because they realize that Pakistan is no match to India. And with its new bold, foreign policy – with its traditional upper hand – in economy, in military, and in technology - they are finding hard to respond - going for silly bravados like 'we will defend our country, we will give befitting reply to India in case of future attack or we are in a state of war preparedness' - or the silly Pakistani media propaganda that show the Pakistani army has captured or killed so many Indian soldiers or has blown this many Indian outposts across the LoC.

How sham now it all looks. How hollow it sounds.

Pakistani military was on high-alert, its F16s were doing midnight road sorties for war preparedness. Its leaders, prime minister, army chief, everyone was busy issuing all sorts of threats against India, including nuclear threats. The eastern border (LoC) was specifically on their radar.

Yet India struck back, and at will. It went deep into the Pakistan controlled territory and destroyed terror camps, not one or two but six, and the whole operation lasted for around four hours. And in spite of all the tall claims of Pakistan of being in a war-ready state, it could not do anything. Pakistan could not beat even the bush properly to push its propaganda aimed at saving its face. 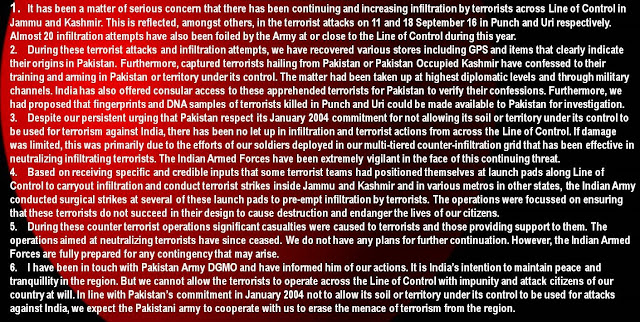