To humanity's great joy, Mother Teresa is now officially declared as Saint by Pope Francis in the ongoing Canonization Mass today at the Saint Peter's Square in the Vatican City. Although Canonization is a religious process and most of the canonized saints, over 600 in the last 50 years, were priests, when the Vatican finds someone like Mother Teresa, one of the biggest crusaders of the humanity, the whole process, even if it is religious in nature and belongs to one particular community, becomes a moment the whole words watches; becomes a development that people of all faiths across different communities await. The twitter trends of different counties once again reaffirmed our faith it. 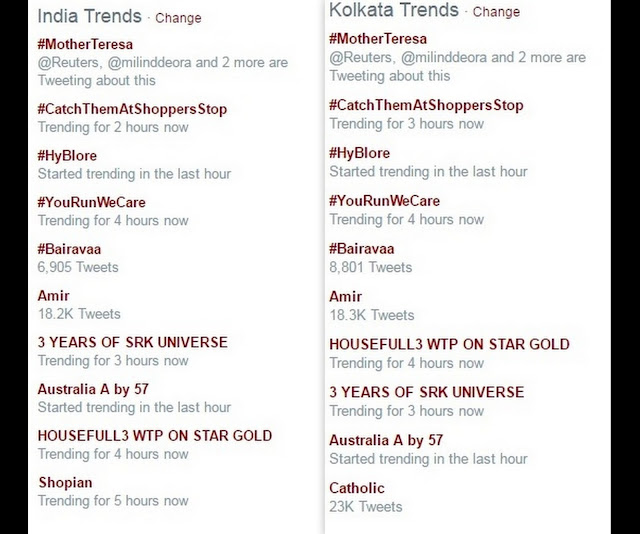 As expected, Mother Teresa trending on top on Twitter India page. It was only natural that Twitter trends of Kolkata were on the same line.

In the Christian nations, she was on top or in top 10 in many countries. Italy, USA, UK, Mexico and Brazil were the big Christian countries where Mother Teresa prominently figured in people's opinions though some other major Christian countries like France or Germany that I checked were not showing her in the top 10 trends. Italy, the Vatican's backyard was obviously painted with Mother Teresa at top. In the US, she was trending at number 2, in Mexico at number 5, in Britain at number 6 and in Brazil at number 8. 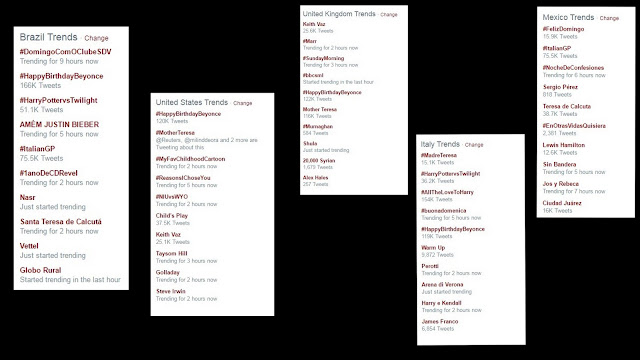 What was heartening to see that she was trending even on the Twitter Trends of some of the Muslim countries. She was at number 2 in Lebanon trends, at number 4 in United Arab Emirates, at number 6 in Malaysia and at number 10 in Nigeria. She was in top 10 in Indonesia trends though I could not take the screenshot. 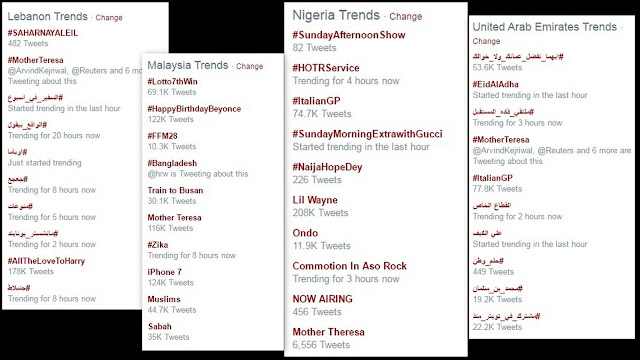