A SHARIF TAKES AWAY SHARAFAT (DECENCY) OF ANOTHER SHARIF!

Nawaz Sharif became Pakistan’s prime minister for the third term in June 2013. His party had emerged as the largest one the national general elections held in May 2013 but fell short of six seats from the House majority threshold. Later, 19 independents joined his party and he formed the government with a simple majority. It was a historical first for Pakistan – power transition from a civilian government to the next - after a democratically elected government from the 2008 elections completed its term.

Since Nawaz Sharif was seen as an influential and strong leader in Pakistan’s politics and since Pakistan was going to have a democratically elected government for possibly another five years, the world had expected that Nawaz Sharif would take forward the democratic transformation process and would be successful in reducing the political influence of the army.

It means Nawaz Sharif had the early mover advantage and a window of six months to make his moves, to fix his equations and to repeat the history of 2008 and 2013.

The world knows that creating and maintaining India’s terror in the mindset of Pakistan’s population has become its army’s lifeline. For this, it goes to any level of propaganda, fear pyschosis and war mongering. Irrespective of what was in Nawaz Sharif’s heart, he chose to target this lifeline to consolidate his grip on power. Narendra Modi invited Nawaz Sharif and other SAARC leaders for his government’s oath-taking ceremony and it looked as if a new chapter in India-Pakistan ties was about to be written. It came with positive vibes. Nawaz didn’t meet the Kashmiri separatists during his visit, a clear departure from the past tradition which saw every visiting Pakistani dignitary meeting the separatist factions from J&K. it was further extended and we saw mangoes and sarees exchanged. Moreover, the Ufa joint statement, released by India and Pakistan in July 2015, had no mention of Kashmir, again a clear departure from the policy adopted by Pakistan in the past.

Though some small incidents and war of words did happen during this period, on a whole, the message that went to the world was that a personal chemistry was developing between Narendra Modi and Nawaz Sharif and this would take care of such small skirmishes. If the external affairs minister Sushma Swaraj was the privileged guest of Nawaz Sharif’s family, Narendra Modi took a sudden detour to wish Nawaz Sharif personally on his birthday on December 25 last year while returning from Afghanistan. Such incidents were indicative of that developing personal chemistry.

But then we should not assume that, in the meantime, the other Sharif (Raheel Sharif) was not doing anything. Not at all!

Raheel Sharif knew that he was behind Nawaz Sharif by six months and he needed to move swiftly – but with meticulousness and detailing. And though he was always busy making his moves, as indicated from time to time by ceasefire violation, terrorism and infiltration incidents in Kashmir, Ufa joint statement and corruption allegations on Nawaz Sharif, especially after his name figured in the leaked Panama Papers, gave him the opportunity he was looking for – to make his final move – to deal the final blow – that would again tell the people that Pakistan is still the real dominion of its army. Equations changed rapidly after it.

Raheel Sharif prepared such a concoction of Ufa, corruption and Kashmir that Nawaz Sharif had no option but to swallow. And to help Nawaz Sharif, there was popular opinion swing in army’s favor owing to incessant terror attacks in almost every part of Pakistan. Add to it the anti-corruption appeal, on which even many political parties openly advocated the clean-up required by the army, Nawaz Sharif suddenly had an adversary who was efficiently crushing him. But Raheel Sharif did it systematically – from 2014 to 2015 – from 2015 to 2016 – no jumps. It is only that Nawaz Sharif realized it too late.

Raheel Sharif first got the India-Pakistan national security advisors level talks cancelled in August 2015. Then got Pathankot terror strike stage managed by Pakistani terrorists and left Nawaz Sharif to bear its cost. Next he fuelled unrest in Kashmir and left names like Hafiz Saeed and Syed Salahuddin, who are in  India’s most wanted list, to run amok and openly spew venom against India.

How long India and Narendra Modi could have taken it?

Narendra Modi gave Nawaz Sharif more than enough chances but it was Nawaz Sharif who left Modi midway and abandoned the aura of decency he was trying to put on ever since Narendra Modi had invited him to his government’s inaugural. If Nawaz Sharif had his political compulsions and political survival to finally plunge in anti-India politics to appease his domestic audience and army in order to save his corruption ridden government, Narendra Modi, too, had compulsions of answering to India’s people who were increasingly growing uncomfortable of Pakistani designs. Raheel Sharif had half succeeded when he had co-opted Nawaz Sharif. He was fully in the game when India said enough was enough and no more talks with Pakistan till the guns went silent.

Now that India has unleashed a diplomatic offensive on a tit-for-tat scale to raise Pakistan-occupied Kashmir and Balochistan human rights violations to counteract Pakistan’s Kashmir rant, it has started unnerving the Pakistani political establishment. Nawaz Sharif is finding it increasingly difficult to convince the world leaders about his Kashmir rant. All this has weakened Nawaz Sharif's position compared to 2013 and everyone knows that it can be the beginning of his end and the initiation of a full-fledged political role for the Pakistani army.

And whatever little decency Nawaz Sharif was left with, that also was taken away when Raheel Sharif made him deliver that rubbish speech with a flat, expressionless face to a UN audience during his UN General Assembly address on September 21.

Nawaz Sharif looked like some poor chap that day who was ejaculating words stuffed in his mouth by Raheel Sharif who used him as a pawn to convey the viewpoint of the Pakistani army. Nawaz Sharif totally looked and sounded spellbound by the dictation that Raheel Sharif had given him prior to his speech. Sharif gave 8 minutes of his 19 minutes UNGA address to Kashmir saying how disturbed the whole Pakistan is and how disturbed the humanity should be on the plight of the Kashmiri people. While explaining all this, an emotional stuff, not even a single emotion crossed from his face. Also, he didn’t mention the Uri attack that had killed 18 Indian soldiers, most of them sleeping, even though it has become clear that the terrorists had come from Pakistan. And to add more to his growing list of miseries (it doesn’t matter anymore if he did it himself or Raheel Sharif again used the pawn in him), Nawaz Sharif, from an official global platform, and that too the biggest one, the United Nations, chose to endorse someone who was self-proclaimed terrorist commander of a declared terrorist outfit, Hizbul Mujahideen. Now only both of these Sharifs can tell who gave them this wisdom, but it was certainly a bravado that is going to cost Pakistan dear and will haunt the nation for years.

And the writing has started appearing on the wall. Pakistan’s duplicity has not gone unnoticed.

Those who matter globally, no one has taken Pakistan seriously – be it Ban Ki Moon, the UN Secretary General, or John Kerry, the US Secretary of State or Shinzo Abe, the Japanese PM or leaders of the European countries including France and Germany. Russia, which is currently conducting a joint military drill in Pakistan, has strongly condemned the Uri attack and reportedly refused the Pakistani offer to carry out drill in PoK. Poor Mr. Sharif is screaming Kashmir-Kashmir but no one is taking him seriously.

The Pakistani army has been notorious for promoting and sponsoring terrorism and history tells us that it firmly believes in the saying that notoriety also makes one known. And as the days are passing, the prevailing geopolitical and sociopolitical equations suggest that Raheel Sharif may repeat the history. He has found success in the first phase of his mission. He has effectively made Narendra Modi and Nawaz Sharif chemistry a history and has effectively crushed the ambitions of Nawaz Sharif of emerging as an icon of democratic supremacy in Pakistan. If he was Pakistan’s democratic hope in 2013, in 2016, he is no more than a corrupt, weak and army-dependent prime minister. 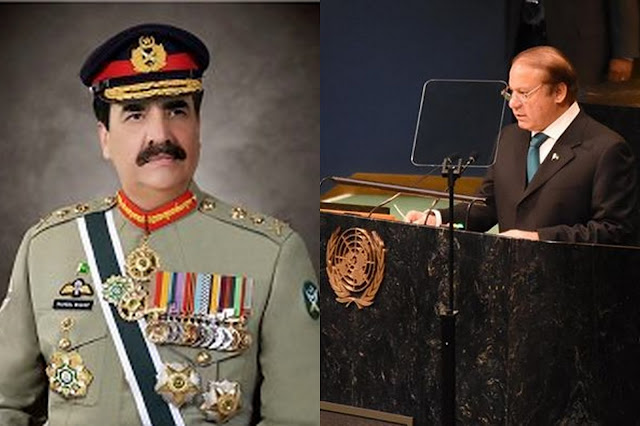