FROM AYLAN KURDI TO OMRAN DAQNEESH: SYRIAN CRISIS HAS ONLY GONE FROM BAD TO WORSE!

Five years ago, in 2011, when the Syrian revolution had begun, the US administration led by President Barack Obama had asserted that ‘Syrian President Bashar al-Assad’s days are numbered’. Hillary Clinton, then the US Secretary of State and now the Democratic Presidential nominee, had reiterated this ‘version’ in 2012. It had given the Syrian people, those opposing Assad and the Syrian rebels, hope then that the Arab Spring would soon see a successful rebellion in the country.

Five years down the line, Syria has become the worst humanitarian crisis since the days of the Second World War. The images coming from the country are horrible. They leave you choked, sometimes in tears. And some of them become the global rallying points – like last year, when images of a three year old dead Syrian boy Aylan Kurdi washed ashore on a Turkish coast while trying to cross the Mediterranean to get into Europe – or last week this year, when the images of a five year old Syrian boy, Omran Daqneesh, stained with blood and rubble – became the global expression of outrage.

These two images symbolize what Syrians are going through. They have nowhere to call home – not in Syria – not outside Syria. Omran Daqneesh’s image is from Aleppo, a Syrian town that is considered rebels’ stronghold. Alylan Kurdi was found dead on a European coast. The five years of the Syrian civil war has effectively obliterated the past, the present and the future of the millions of Syrians. 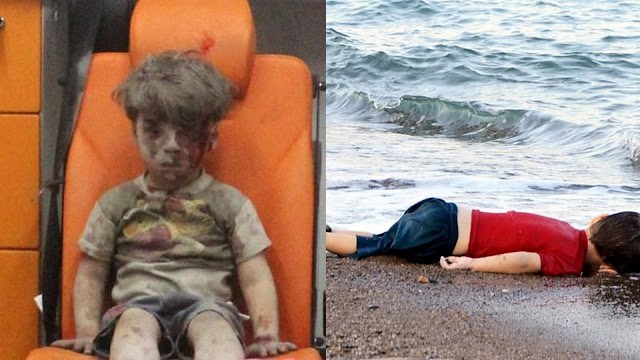 When the Aylan Kurdi’s image had hit the world headlines in September 2015, some 13 million Syrians needed immediate humanitarian support. The figures from an Amnesty International report say that by September 2015, the Syrian civil war had left 220,000 dead, over 4 million refugees and 50 percent of its leftover population internally displaced (some 10 million).

From September 2015 to August 2016, the Syrian crisis has only gone from bad to worse. Now there are over 6.5 million Syrian refugees scattered in different countries. The civil war death toll now stands at around 500,000. If we draw a plausible line according to the figures available from the Syrian rebel factions and as per the increased hostilities aided by the Russian bombings, the internally displaced population now stands at around 12 million.

Yet the world community does nothing more than counting the Syrian dead while the number of victims is rapidly going up.

On one side, an emboldened dictator-cum-mercenary-cum-warlord-cum-butcher, after the Russian support, is slaying his countrymen in flocks, using even the chemical weapons. Then there are terror outfits like the Islamic State or the Al Qaeda affiliates or even the Syrian rebel factions. They have sandwiched the common Syrians – killing them, forcing them to live under siege or forcing them to flee the country – to a place where they don’t know if they will see the next dawn.

This ongoing horror has given us another event that once again raises questions on us being the members of a globalized world run by a globalized code with a unifying organization like the United Nations. Barring few, almost all countries are its members.

Events like Syria say the UN is failing; the world community is failing – because the Syrian crisis/civil war is now in its sixth year while the major police nations of the world, who invade an Afghanistan, an Iraq or a Libya, have let that happen. Afghanistan invasion could have been a spontaneous response to the 9/11 attacks in the US but the flimsy grounds on which the Iraq offensive had been launched has always been in questions. The latest British public inquiry report into the Iraq war, the Chilcot Report, which was submitted on July 6, 2016, states that Saddam Hussein didn’t pose imminent threat and that the war should have been averted.

The never ending Syrian crisis has forced the biggest migration of people since the Second World War – a wave that the European countries are feeling too difficult a crisis to handle. Syrians are the biggest migrants group in Europe – those who have got asylum – those who are still waiting in the ‘nowhere’ zone – and those who lost their lives while trying to reach those elusive borders of the European continent.

The countless images coming out of Syria – of Omran Daqneesh, of Aylan Kurdi, of Syrians dying in chemical and explosive attacks, and of ghost towns with ravaged buildings – sum up the horror tens of thousands of human-beings are forced to live day in, day out, seeking the shore to fix their lives, a shore that is increasingly becoming elusive.

Yes, we live in a world that has always been plagued with ‘humanity killing developments’ like wars, crusades, religious wars, ethnic cleansings and the Holocaust, yet images like these, again and again, leave us thoughtless, speechless, soulless and lifeless. They say all. Their backdrop becomes hauntingly clear just by a mere look. Images like these make our lives beyond redemption. They put us all, the combined human masses of the world, in the dock over a crime that humanity can never get rid of. They rightly negate our claims of being the citizens of a civilized world.