ELIE WIESEL, BIGGEST CHRONICLER OF THE HOLOCAUST, IS NO MORE..

The article originally appeared on DailyO as - Life and times of Elie Wiesel, Holocaust survivor and chronicler.

Elie Wiesel (1928-2016), the 1986 Peace Nobel Laureate and a Holocaust survivor, is no more with us. He passed away last night. He was 87. He was a Jew born in Romania, was forced to the horrors of an Auschwitz life and became a US citizen and a Boston University professor.

Elie Wiesel will always be remembered as the most haunted voice of the Holocaust years – the years when he somehow survived the concentration camps run by Adolf Hitler’s Nazi Germany during the Second World War from 1939 to 1945 – the concentration camps that exterminated millions in a systematic manner only because Hitler and his people considered them inferior human beings. They saw them as the problem and the only final solution was to wipe them out.

Elie Wiesel was the biggest chronicler of the Holocaust days – writing over 50 books – based on his haunting memories. His autobiographical book Night came to me as a soul-stirring experience.

Before it, I was largely focused on documentaries, visual media, news reports and studies on the Holocaust to know more about the largest pogrom of modern human history, to feel its pain, to realize its message. But the experience after Night transcended all and made the Holocaust memoirs the major part of my Holocaust reading, of the past, as well as the ongoing ones.

The sudden change, from the peaceful childhood days to a life of utter debasement, where there were no children, no adults, no males, or no females, just living human corpses, waiting to be gassed and burned, brings poignant thoughts that shake your very existence.  His life and work remind how debased the humankind can become and how resilient the humanity can come out to be.

what Elie Wiesel’s timeless classic ‘Night’ tells us: DARK SIDE OF THE MAN THAT CAN KILL MILLIONS

Writing about the book Escape from Camp 14, biography of a North Korean concentration camps survivor Shin Dong-hyuk written by an American journalist Blaine Harden, reminded me about Elie Wiesel’s Night, the memoir that details THE DEGENERATION OF LIFE in the Nazi concentration camps during the Second World War

While Escape from Camp 14 is about the journey of a man, born and forced to live an animal life, and how he finds the human in him; Night is about how a man, born to lead a human life, is forced to a life that is worse than of animals.

At over 120 odd pages (the Penguin India edition), the ‘slim’ Night numbs you by the simple words of confusion about life, faith, death and relations as told by a young Elie Wiesel reflecting on the tormenting days of his life in different concentration camps including Auschwitz and Buchenwald.

Night begins normally with observations of a teenager about a quiet Jewish countryside in a remote town Sighet, under Hungary’s occupation then. It tells how a typical Jewish family lives there, how a boy dutifully tries to be religiously observant, how the community there feels insular to the outside world’s activities and concerns, under an ongoing world war then, believing that it cannot reach them. 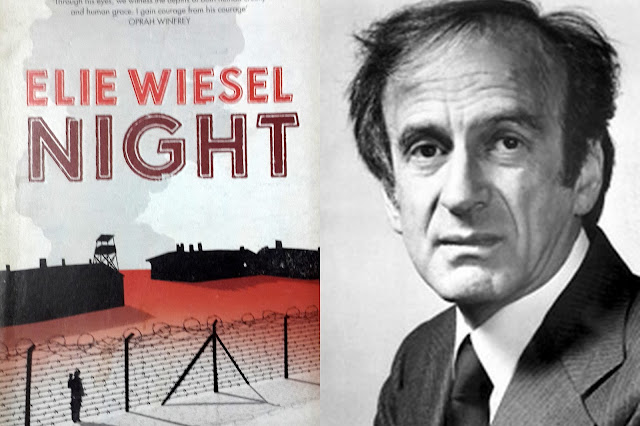 Night exposes the inherent human weakness – clinging to the very last of the failing hope that the God would come and exercise some miracle – we see it in Elie’s father when he believes that something can still be worked out when almost of the Jewish community is already sent to Auschwitz; we see it later on as the memoir progresses when the Jews in the concentration camps think every now and then about the world war coming to an end while praying to the God; we see it in the escapist thoughts when the Jews of Sighet initially take German soldiers as the good Samaritans even if their every freedom is curtailed the very day German soldiers arrive in the town; we see it on every such occasion when the characters of this memoir think that they are not going to be gassed whenever they get a comparatively lesser fiendish security guard.

Night is representative of the dark side of the man that can poison and kill millions. Millions of Jews were gassed, burned and exterminated in furnaces and ‘Night’ tells that sordid tale through the eyes of teenager Elie who struggles with his conscience first, about his trust in the God that he finds incoherent with the acts that begin the day they board the cattle train to Auschwitz, and grows on to degenerates into the cattle mentality of surviving anyhow even if it means sacrificing your father and shapes ultimately into a distrust in anything like the very existence of the God. What else can be expected when someone becomes a mute spectator to the Nazi killing machine of Hitler’s Germany – the ‘Selection’ of humans as animals - gassing and burning them in thousands daily. Elie survived months in the concentration camps while living near to those crematoriums.

Night is not just a memoir from the Holocaust literature; it is also a sensitive book on father-son relation. Night tells us about the internal struggle of the human conscience when Elie writes about that ‘night’ that changes all. The night they board the train makes their human comrades inhuman at the very go – the way his community people beat a old woman crying consistently after her family is taken away. No sympathy – just the savagery of the jungle to survive – that ‘night’ began it. Elie watches himself becoming a different person, a debased survivor. Though he remains very much a father’s son, with his father being the only symbolic emotive quotient and support throughout his captive life in the concentration camps, at times he thinks of him as burden, only to blame himself the next moment. There come moments when he watches his old, frail father being brutally beaten by the guards but he tries to avoid the eye contact.

And teenager Elie was just one out of the millions in the concentration camps, who were forced to think like this; who inherited this internal struggle for years to come; who got unending ‘night’ hours imprinted in their conscious to haunt them as these words of Elie Wiesel during his Acceptance Speech for the Nobel Peace Prize sum up:

"Can this be true?" This is the twentieth century, not the Middle Ages. Who would allow such crimes to be committed? How could the world remain silent?”