TENDER FOR A TURBAN (OR TWO): IT HAPPENS ONLY IN INDIA!

I came across a social media post today. Later, someone forwarded it on my WhatsApp ID.

It was a perfect example of how labyrinthine Indian bureaucracy is - that how tortuous its ways are - that how obsolete its functioning is - still!

It was a newspaper cutting of an advertisement by the General Administration Department of the Himachal Pradesh government - issued on May 31.

It is a tender advertisement issued in the name of an Additional Secretary level official.

And it is for!! Hold your breath!! Even if you are aware of some silly ways of the Indian bureaucracy!!

It is for turbans to be used by the drivers of the GAD, Himachal Pradesh.

Okay, if transparency has to the sole point, then why not follow the due process - even if it is for turbans or for a bicycle!

But what if it is for two turbans - and one of the stated terms of the tender notice says it cannot be more than Rs. 50 a meter.

So, for the sum total financials related with this 'turban' requirement cannot go beyond Rs. 350.

That is the sum total wisdom of our bureaucracy that propels the minds of the most brilliant lot of our nation - after all, recruitment to the Indian civil services is probably the most gruelling selection procedure in the country.

And examples like this 'turban tender' show transparency can never be more transparent than this! 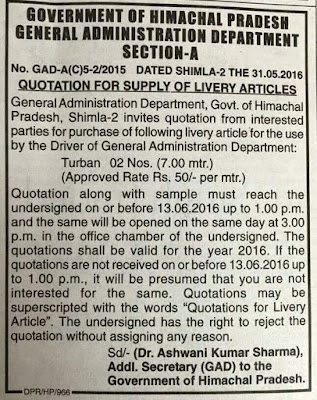 This is the screenshot of the page with the directing link on Himachal Pradesh's website. 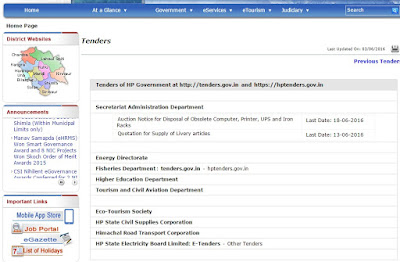 And this is where you are directed. 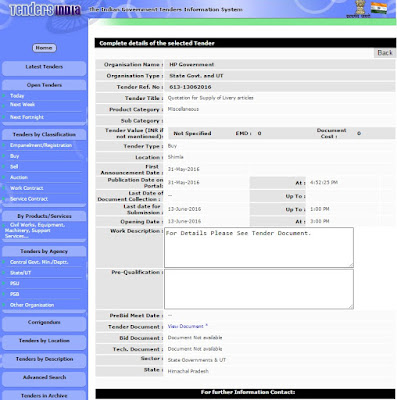 And you can find the PDF of the tender document here.

I would not say 'see it to believe it' - because such pathbreaking acts are a norm with the archaic mode the Indian administration functions - including its bureaucracy - be it the archaic laws - or the all pervasive VIP culture. You can add more to it.

'See it to feel the way you want to feel about it.'