The Rajya Sabha speaks in the voice of the Indian National Congress and the political opposition that see its ideological and political survival in BJP bashing.

That is the sole reason responsible for the logjam around important Bills like Land Acquisition, tax reform bills including the Goods and Services Tax Bill, the Whistleblowers Bill and so on.

Both the Houses define each other as tyrannical and anarchist - and the debate always rages.

And this skewed discourse is best reflected best in the content of the Lok Sabha and Rajya Sabha television channels.

The content and the manpower selection and retention are thus aligned accordingly.

Yesterday, while randomly changing channels – I came across a perfect testimony to this – on June 25, around 3 PM. 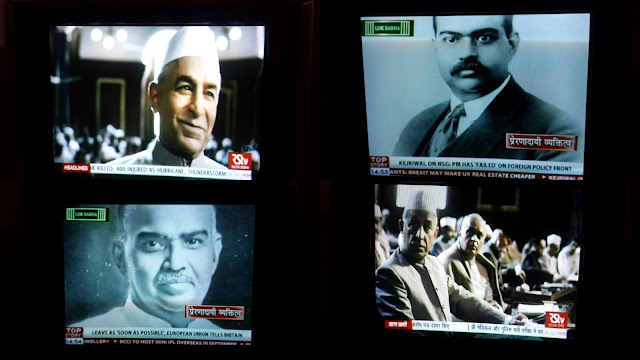 The Lok Sabha TV was showing a programme on Dr. Shyama Prasad Mukherjee, once a minister in the Jawahar Lal Nehru’s cabinet who quit the Congress due to his difference with Pundit Nehru and formed the Bhartiya Jana Sangh, the predecessor of the BJP.

Like him or like any other political figure or ideologue associated with the BJP or its ideological mentor, the Rashtriya Swayamsevak Sangha (RSS), most in India would not see much of them on TV (especially on the state run TV channels). But they are now all over, especially on the state channels run by the government like the Doordarshan, India’s national broadcaster.

Likewise, on the Rajya Sabha TV, still under the control of the Rajya Sabha with its control gear in the hands of a Congress member, it still revolves around political, ideological and historical figures of the post-Independence India – like Pundit Nehru.

The Lok Sabha TV was showing a programme on the Zamindari Abolition Act with Pundit Nehru in focus.

The two programmes on these two channels – in the same time slot – on the same day – indicated only this – reaffirmed only this – though it may be an unrelated, random event.