While writing my longish mail on Amazon's 'Subscribe and Save' category and tweeting it to Amazon, Amazon India and Jeff Bezos Twitter handles, I had not expected a prompt reply.

It was based on my previous experiences. I have done this exercise with many companies - on this or that issue related to them.

So far, my best experience has been with Dell India - its customer services team and its social media extensions.

And about my worst -well, there are many and picking a particular one is difficult. But if I am asked to pick one -I would say Eureka Forbes.

After consistently following multiple times, through phone and Facebook extensions, I was forced to hang up but the Eureka Forbes folks refused to buzz from their eternal slumber. Apart from many product and service related issues, I was not sent even my receipt that I was promised after making online purchase for an Aquaguard Enhance water purifier (along with a freebie, that, too, never came).

Though a response from Amazon India over phone line has been efficient so far, its Facebook version was dull, and on the line seen so far, with so many companies.

I posted my write-up on the issue I am facing on Amazon India's Facebook page. Obviously, it was the headline followed by the link of the write-up. Soon, a message popped up, a reply from some guy entrusted to monitor Amazon India's Facebook page. On expected, and worn-out line, the person told me that 'I needed to be specific' in what I wanted to say.

Well, what can I say on this!

We folks spend a great deal of time writing about issues we face and we expect that the concerned organization would at least take the pain to read them.

I don't know if that happened.

Because there was no further reply from any Amazon staff after I wrote back requesting that the person should open the link attached - where I had written 'very specifically' about the problem I was facing.

And it was when it was not an outright criticism - but a suggestion conveying a potential problem that may see more of it in the days ahead. 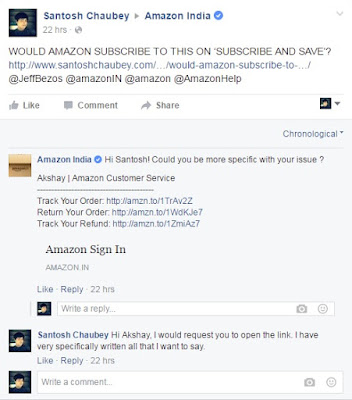 Here again, I tagged Twitter IDs of Jeff Bezos, Amazon, Amazon India and Amazon Help along with my write-up's link.

But no response has come so far  and its almost 24 hours now. 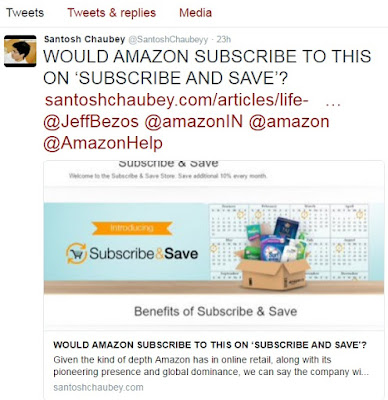 Yes it was a weekend and there might be slippages but it looks quite awkward given the fact that there would be dedicated social media teams, even for Jeff Bezos' personal Twitter handle.

I hope there is still time given Amazon India's track record and given the fact that E-commerce or online retail cannot dominate a business scene if it is not customer friendly.

I do this exercises randomly to get some handy information about how companies are treating their customers - about their marketing communication and public interface practices in the B2C environment of E-commerce that is slated to grow manifold.

Most of the companies and their honchos fail here, some miserably.