It is one of those rare images that make profound policy statements – yet, will it change anything?

The Pope chose the Holy Thursday rite to convey the message that we all so desperately need – that we all are same – in joy – in pain – that we all are brothers – be it the European residents – or the migrants from Asia and Africa that have created the biggest human crisis in the Europe since the World War II.

When he washed and kissed the feet of refugees, including Muslims, Christians and even Hindus, it was a strong counter-statement to those who are out there to exploit the xenophobic mindsets to score political mileage.

Remember the rise of Adolf Hitler in Germany – who exploited the nationalist sentiments of Germans after the loss and humiliation of Germany in the World War I to create his brand of ultra-nationalism that ultimately gave the world the World War II and the Holocaust and millions dead across the continents!

Yes, it is not going to be the World War III – but again, human lives are at stake – and millions of them.

Thousands have been killed in the ongoing war theatres in Syria, Iraq, Afghanistan, Somalia, Nigeria, Libya, Yemen, Lebanon and many other Asian, African and Central American countries.

And the exodus is coming mainly from Syria, Afghanistan and Iraq.

We talk of universal nature and values of the human rights.

We have a world body for it – the United Nations.

We have a global agency dedicated to look after the affairs of the refugees – the United Nations High Commissioner for Refugees.

We have an International Criminal Court – we have an international police organization (Interpol) – and we have many strategic and trade bodies panning across the globe.

That directly tells we all are global citizens with similar rights to live and grow.

Now, when there are domestic war theaters forcing people out of their homes, of their cities, of their countries – isn’t it the responsibility of everyone – including those in Europe – to give them shelter – to give them a place to live – to preserve their right to live and grow?

Yes, these are utopian propositions – but have always been true – and will always be – even if the ground realities are starkly different.

When Pope Francis delivered his message of ‘brotherhood’ by embracing the Muslim refugees, he just did that.

It was a humane attempt to convey the message of seeing the God in everyone, be it a Christian or a Muslim, in the times of war rhetoric and increasing anti-migrant voices in the European establishments after the spate of terror attacks in European nations, especially France and Belgium.

Let’s hope sense prevails – because the millions – displaced from their houses – and trying to pick the thread of their existences in Europe - need it desperately. 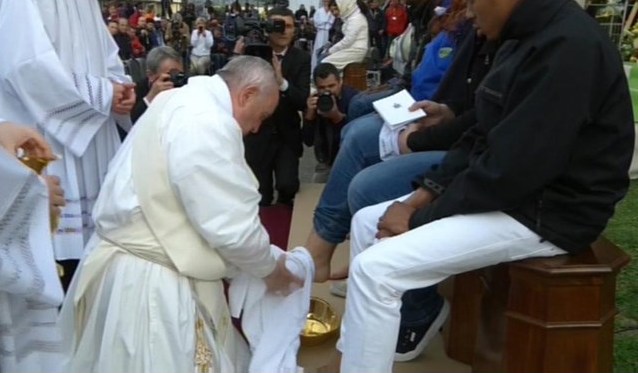