TO THE POINT ON THESE JNU ROW DEVELOPMENTS

The JNU row has become the talking point of the nation. The controversy is spreading like a wildfire now - from Jawaharlal Nehru University in Delhi to Jadavpur University in Kolkata to University of Hyderabad to Banaras Hindu University in Varanasi - almost across India - and if something concrete is not done - it may soon engulf the nation.

And when and if it happens so - it may upset many equations - apart from destabilizing the society - because we must not forget that even a China cannot control students from coming together and organizing a Tiananmen protest that resulted in the Tiananmen Massacre - one of the most horrific and most talked about dark chapters of the 20th Century.

And in all this, one development stood out for its creativity - on presenting some ugly faces in this row - of goons in the garb of people next door and of Delhi Police - clearly on the back-foot here - by making a 'big something' out of almost nothing and the way BS Bassi, the Delhi Police Commissioner is reacting, he is sounding more and more empty.

The Telegraph's front pages of February 16 and February 17 are right at the point in capturing the essence of the developments in the ongoing row.

The February 16 front page has a cover story talking about BJP MLA OP Sharma and the unruly mob of lawyers who were worse than goons who attacked supporters of Kanhaiya Kumar, the JNU Students Union president who has been arrested for sedition, and journalists including women journalists - in the court premises - in India's national capital. 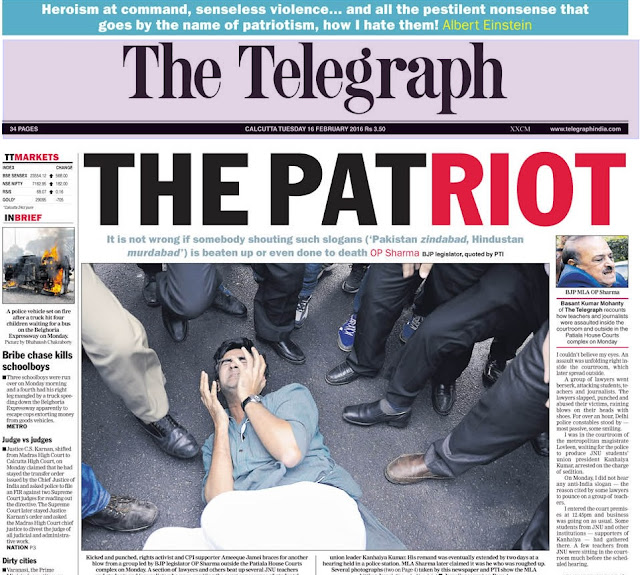 Its headlines ''The Patriot' with 'riot' in red colour hits right chords. Yes, we cannot allow anyone to abuse law like these bunch of lawless lawyers and OP Sharma did - even if we knew 'how law would take its due course' in dealing with these goons.

The February 17 front page was again rightly and very sensibly headlined 'The Thought Police' - on Delhi Police and its 'now controversial' chief Bassi. Bassi has clearly failed here - himself and us. 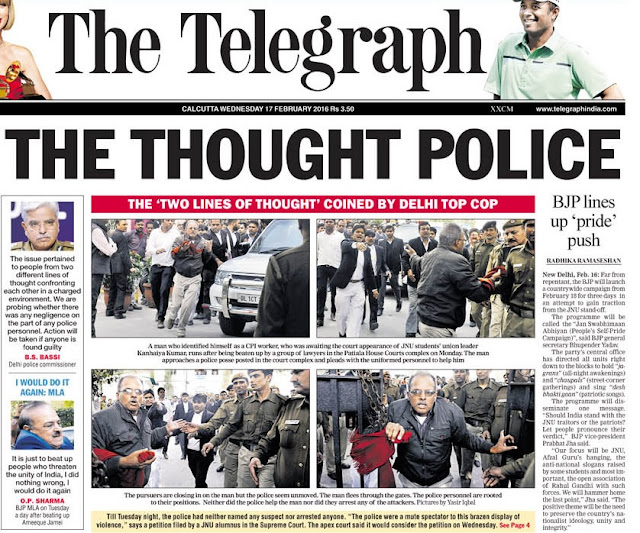 People had thought he would be the first Delhi Police Commissioner in many years to have completed his term without a major personal controversy - until this JNU row happened. We don't know what are his reasons to act so - but his attitude has raised unanswered questions - and he has consistently failed to justify his 'discriminatory' stand - on coming down heavily on Kanhaiya Kumar - and on conveniently ignoring the goons in the garb of lawyers and OP Sharma - when everything happened in front of press cameras - when the Delhi Police filed the sedition case against Kanhaiya Kumar  on a video clip from a television channel.