THE REVENANT AND THE HATEFUL EIGHT – SEASON OF WHITE WESTERNS

These are two movies, two auteur movies that any moviegoer who loves watching films for the art of cinemamaking would love to watch – again and again – because there is much more to read in between the lines – in frames – in props – in body languages and silence(s) of characters – and in locales – in fact, it is always a pleasure when a film offers elements on platter so much of semiotics.

Locales – the most important part of Westerns after ‘body language and silence’ of characters – are in abundance here – with an abundance of symbolisms – here in these two movies.

These are no doubt White Westerns – dominated in every aspect by snow-clad mountains – their environs – their dialogues – the conversation they hold – the push that they give to the characters.

Classical Westerns are about simple but difficult men in difficult, barren, arid terrains of stone-clad mountains and sand spreads.

These White Westerns, the latest run of which began with Django Unchained, we can say – are stories of difficult men in more difficult terrains – snow, ice and the expanse which primarily steers the plot.

And coupled with brilliant performances, which are equally brilliantly directed, the locales in these two movies give us timeless masterpieces of the world cinema.

We can say had it not been the premise of these two movies – the lyrical flow of death in the ravines of life in the most uninhabitable and inhospitable parts of the world – we would not have such influential films – the visual language of which transcend the boundaries of filmmaking, especially in The Revenant. 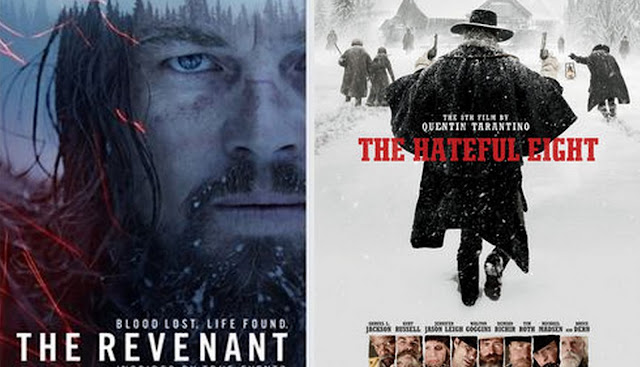 Featured Image Courtesy: Movie posters from Wikipedia pages on The Revenant and The Hateful Eight