And we can say they continue, even extend the poor show by the Indian Navy on this front.

While two of the claimed official websites (www.joinindiannavy.gov.in and www.nausena-bharti.nic.in) are silent on the social media extensions of the Indian Navy, the other one, that looks in a sort of ‘abandoned state’, does give away three buttons – tucked on the extreme right of the webpage – for Twitter, Facebook and Google Plus. 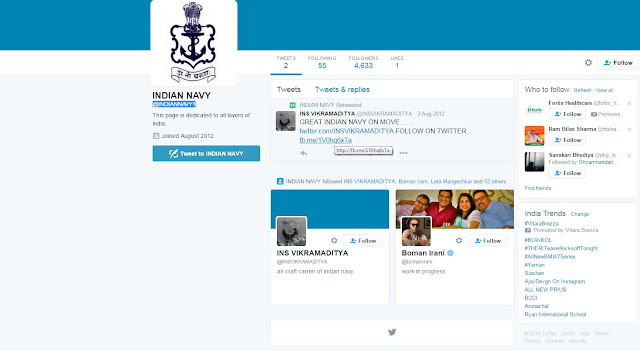 But what leaves us squirming is the content on the page – just one tweet dating back to August 3, 2012 the month the account was created. It seems after creating the account, the Indian Navy thought to dump it – but in that case they, ideally, should have removed it from their website. Okay, it is not on some of their ‘official websites’ but then it is also on their ‘official website’.

Now about its Facebook page. Here is the screenshot of www.facebook.com/IndianNavy. 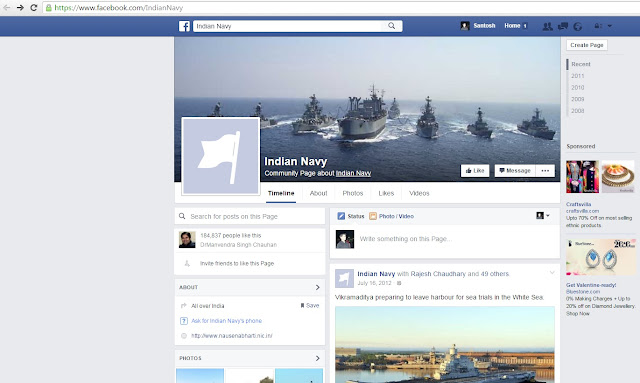 A cursory look at the page’s timeline tells it indeed served as the official Facebook page though the page now says that it is a ‘community page about Indian Navy’. Interestingly, on its ‘about page’, it still says that it is the ‘official Facebook page of the Indian Navy’. And likewise, it has many entries that kill its aesthetics – like it redirects us to the Indian Navy’s website through a wrong link (www.nausenabharti.nic.in) – that never opens.

True, the organization that cannot maintain a Twitter handle or a Facebook page cannot be expected to create a Google Plus page – even if ‘Digital India’ is expects them all to do so.