It is a favourite symbol to get nostalgic for many in India - especially for our parents or people in their age-group - and even for many of us.

While it happened to be in possession of Indians across the nation in their generation, we used to have our hands on it regularly – and we know why.

We grew up watching and reading its advertisements - and also of its 'much bigger' brother - and though not many of us (in fact I don't know any) were game for it, they had respect value for the brand name and felt sad that how the government apathy had killed an iconic brand that had once become synonymous with a product that we had so long ago assimilated with our life styles.

That is HMT. Hindustan Machine Tools.

A brand that was once the alternative name of watches in India, right from its inception in 1960.

HMT tractors were another significant product line of the company established by the Government of India that used to echo even in our backdrop – especially with Doordarshan advertisements in those days of ‘no satellite or private television channels’.

And that was the sole reason, the strong brand recall, due to its glorified even if distant past (irrespective of its nihilistic present and future), that I spontaneously found myself, first looking at, and then going inside to make some queries - in this HMT showroom (exclusive HMT showroom) at Jhandewalan Extension, near Connaught Place (the market complex was named ‘Anarkali Market Complex or so). 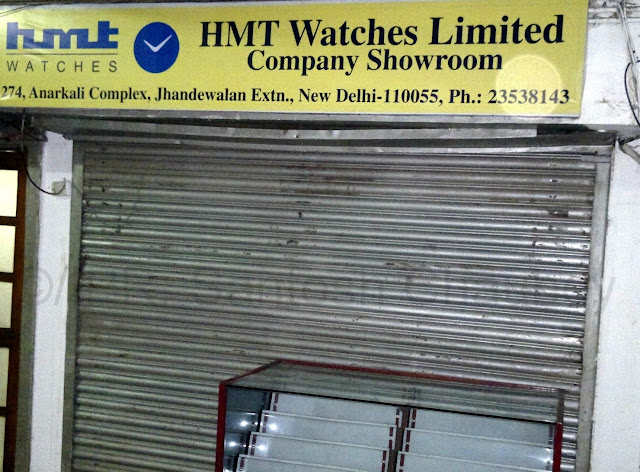 It was the first HMT exclusive HMT showroom that I had encountered in my life. The brand had started losing its market share and had become almost irrelevant by the last years of the last decade of the 20th Century. And so, when I saw its company operated showroom in 2011, in Delhi, I felt surprised and curious that the government was still bleeding taxpayers by continuing the brand that it so badly botched up.

Though I always felt sad for the brand, even more worrying aspect was its continuance after it had lived its life (or it had been killed effectively). After all, the pragmatic management in a socially responsible nation required that such operations be discontinued immediately and at the same time, their employees be adjusted elsewhere.

So, when I came to know by employees of that showroom that it was one of the few remaining showrooms and was slated to bring down its shutters permanently, I felt a sense of déjà vu.

That was four years ago – in 2011. That was my last active encounter with the brand – with HMT – the chance discovery that had come after almost 20 years.

This January 1, in 2016, when I first scrolled my smartphone for news updates of the day – I saw HMT splashed again – the news stories about how its Haldwani plant in Uttarakhand is restarting on January 1 to complete the last order of around Rs. 1.5 crore that HMT got from its Bengaluru office, where the outfit was headquartered.

Well, that was again a nostalgic news break, and every news report carried it in the same fashion – and the first thought that came to my mind was about this chance ‘discovery’ some four years ago – and the second one was about my father’s HMT watches that he kept as ‘antique possessions’.

The first thing that I did was I read up all related news reports. The second thing, I called up father. The third thing, I googled YouTube for HMT advertisements. And the fourth and the logical thing that concluded that morning’s exercise, before I am writing this, was reading again about how a strong brand was made obsolete and why the governments should not venture into territories like watch-making or cloth-spinning.

Like many other brands promoted and built by the government of India – HMT too had that free fall trajectory where no real efforts can be made to arrest the dwindling fortunes – because that is simply not the government’s job to do.

Yes, every government is ‘the timekeeper to the nation it represents’ but it doesn’t mean it starts making watches.

HMT is an example what happens when it tries so –  that a strong brand always lives with this imminent danger that it can die soon – that it can soon become ‘synonymous’ to ‘antique’ – in a matter of few years.

Here is one HMT advertisement - about HMT Watches (I could not come across the official looking one about HMT tractors but will sure try!)