WHEN I GOT THIS LOTTERY SCAM EMAIL FROM A UNIVERSITY STUDENT EMAIL ID!

Some days ago, on December 24, I received an email on my Hotmail ID that I don't use frequently. The mail had been sent twice with a brief message 'can we talk?'. I saw the message on December 28.

Like it happens, emails from unknown IDs make us suspicious, especially in the times of email frauds, in the times of chronic phishing, especially when they are with such terse, cryptic messages that openly tell us this conversation, if taken ahead, will lead us to become victims of a financial fraud or an email scam. Such cases have been widely reported in the media, from across the world.

But the email ID here is what made me look further into it. After I did some basic googling, I found this email ID was of a student from the Western University, Canada (or University of Western Ontario) - from its Department of Education. I came to know that it was a reputed university consistently figuring in global rankings and was among the top ranked in Canada.

The next question was - why some student from such a university in Canada and from an educational stream not related to mine wanted to contact me?

It led me to think the one plausible thought that came to my mind - the possibility that this email ID was hacked.

To clear my thoughts further, I replied to the mail with an expected  normal - 'who is this?'

And to speak for my thoughts, as I had thought - as happens - I got a long reply the next day - this time from a different email ID with a different name - with similar fraud lines like 'the person writing the mail was initiating the process to discuss further about a great sum (in GBP - the notorious email lottery scams) that had to be transferred to my account' and that 'I needed to exercise utmost caution and privacy while taking the communication further' and that 'the whole transaction would be processed through India's central bank' and so on.

As soon as I read this, which reaffirmed what I was thinking, I did the same that I do with this sort of emails - marking them for my spam mail folder and deleting them.

But what is worrying here is the email ID.

I cannot say and would never like to think so - that some student from a reputed university would write a mail that would lead to a financial fraud.

That pushes us to think about this horrible possibility - that these criminals, these scamsters are hacking email IDs of genuine people to entrap their victims - like in this case, where an email by a university student led me to reply back - something I (and many others) don't do in case of an email by an ID with suspicious traits.

I think I will write an email to the Western University, Canada about it - and hope they act swiftly on it.

Here is the screen-grab of website of the university with the email ID from which I got the mail. I am putting this screen-grab in public domain as it is already open to public access. I hope it will alert the concerned people as well as many unsuspecting ones who ultimately become victims of such frauds. 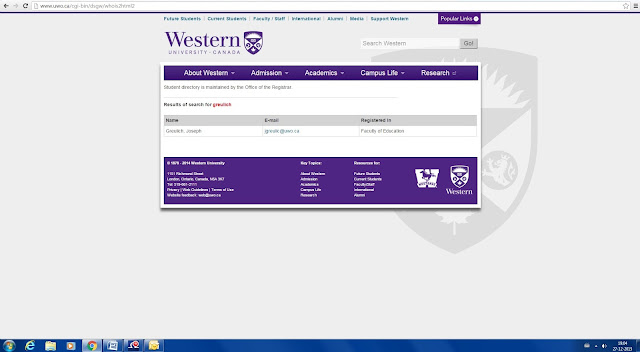