Yes, that is the most important aspect in the war humanity is waging against HIV/AIDS.

It happens with time that the scientific developments bring changes that make once chronic health problems easily manageable and it will happen with HIV-AIDS as well.

But the biggest problem associated with HIV-AIDS is the social stigma that the victims face - leading to their expulsion from society - their social boycott - their ‘criminal’ humiliation (and intimidation).

And it is not country/society specific and can be felt in many societies that are seen ‘free, democratic and advanced’.

The crisis can be managed well if scientific prowess goes together with increasing social mainstreaming and acceptance of millions living with the dreaded virus - the single biggest health crisis the world has faced in the recent history - ever since it was identified in 1984.

Red Ribbon, the symbol that was created in 1991, to express solidarity with the victims, the HIV-AIDS affected people, and to spread awareness about the dreaded virus, has become the face of this movement - the movement that is yet to see significant gains in 'social terms' in many societies. We can easily gauge it from the fact that people related data on HIV-AIDS are still strictly confidential.

And Red Ribbon or any campaign to spread solidarity and awareness about the people affected with HIV-AIDs has to be ‘this feeling’ at its core - that it has to remove the feeling from their minds that they are 'victims'.

But, as we all know, it is easier said than done.

In fact we consistently feel how difficult it is - to make people living with HIV-AIDS very much parts of our lives, our families, our societies - something that they are rightly entitled to - but something that gives us all a feeling of being similar to an 'unachievable task'. 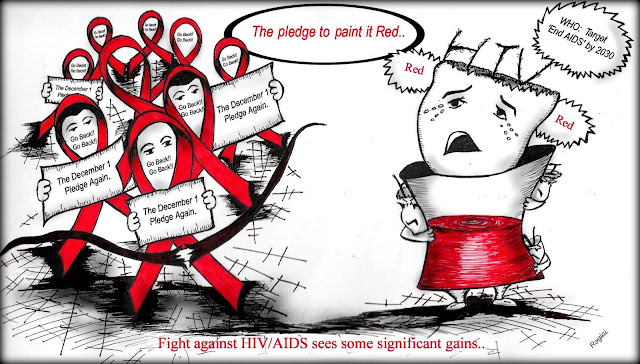 A sketch by my sister Ragini on this World AIDS Day