We all know the whole ISIS existence is totally anti-humanity. In fact, we cannot expect any semblance of the universal values of humanity being followed in the territories controlled by terrorist organizations like ISIS or Al Shabab - or for that matter, even radical organizations like IRA or ETA or Adolf Hitler's Nazi party – or for that instance, in many countries run by dictatorial regimes with one party hegemony.

Such outfits always find this or that excuse to maintain their grip over power and most of them do so in the name of religion like ISIS is doing or quoting ethnicity and national pride like Nazi party did.

In fact, nothing could parallel the worst atrocity perpetrated in the name of ethnic superiority and national pride - the Holocaust - millions of Jews and many others were methodically killed in a cold blooded manner over the years. They were starved to death. They were gassed. They were arbitrarily shot. Many of them were burnt when they were still alive.

We all know, with the beginning of the end of the World War II, Hitler's forces came to know that their defeat was imminent and they were going to be subjected to legal action for their war crimes. And so, the officials of the Concentration Camps, which dotted the German occupied territories, especially in Germany and Poland, were ordered to kill all inmates and wipe the evidence. In many camps they did so – but failed miserably. In many they could not do it.

In our generation, no one has seen the Holocaust, but those who follow it can very feel the horror by going through the literature available on it and by engaging with the visual documentation including fictional narratives based on experiences of victims. An engagement with the Holocaust documentation stirs your whole identity.

I had the similar feeling when I saw this tweet yesterday. It was by Col. Steve Warren, the Spokesman for the Operation Inherent Resolve (OIR), the US military operation against ISIS or ISIL (Islamic State) as his Twitter page says. Mr. Warren had tweeted a document that listed directives for the ISIS fighters on 'how to commit atrocities on civilians before fleeing Fallujah' so that the allied forces could be painted in dark in the propaganda material of the world's most dreaded terrorist organization - that has established beyond doubt its grip over advanced communication technologies.

ISF is for Iraqi Security Forces and PMF for is Popular Mobilisation Forces, considered a Shia militia wing. They are engaged in fierce battle with ISIS. The ISIS directive lays down on how the ISIS fighters, dressed in ISF and PMF outfits, should maximize efforts to creates stage managed scenes for ISIS propaganda videos and it includes assault on women and execution of people.

Here, it is about one Iraqi city Fallujah. ISIS (or ISIL) adopts similar cruel ways in other cities in territories under its control – whether fleeing or not - killing people at will - in the name of ethnic cleansing and religious wars - like it was done in the Holocaust - though at a much larger scale. 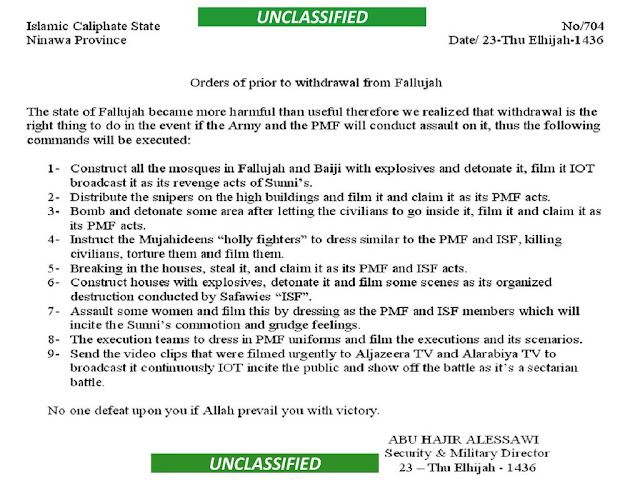 The only difference is - while the fleeing German forces tried to dispose of the incriminating evidence pushing them to commit even more crimes, the fleeing ISIS fighters brazenly carry out atrocities to film propaganda videos to flaunt their activities, to lure people further in the name of religion.