WHY CAN’T OUR POLITICAL ESTABLISHMENTS ACCOMMODATE VOICES LIKE KOVAN?

While striking down the Section 66A of the Information-Technology Act, the Supreme Court bench had observed, “It is clear that Section 66A arbitrarily, excessively and disproportionately invades the right of free speech and upsets the balance between such right and the reasonable restrictions that may be imposed on such right.”

The observation focuses on ‘balance between right and the reasonable restrictions that may be imposed on right’, here in the context of the freedom of expression, and rightly so because the law enforcing agencies have had a pretty bad track record in that.

The SC bench of J. Chelameswar and Rohinton F. Nariman said, “If Section 66A is otherwise invalid, it cannot be saved by an assurance from the learned Additional Solicitor-General that it will be administered in a reasonable manner. Governments may come and governments may go, but Section 66A goes on forever. An assurance from the present government, even if carried out faithfully, would not bind any successor govt.”

Going by the bad precedent set by the law enforcing agencies, the apex court rightly refused to trust the words of the country’s political establishment.

Because the political administration has time and again acted so – with incidents like cartoons and Facebook posts being the reasons for charges like ‘sedition’ and follow-up arrests. Flurry of such cases and the widespread outrage over them were the central reason behind the SC’s decision on 66A.

But what about the concerned Sections of the Indian Penal Code (IPC)?

66A was obstructing the freedom of expression with incessant cases of its misuse, and the right logic was put forward that anything of serious nature causing some serious offence could well be handled by the concerned Sections of the IPC.

What about the misuse of the concerned Sections of the IPC?

There is a long list and yesterday’s arrest of a Tamil folk singer, S. Sivadas or Kovan, for writing and propagating songs with ‘allegedly derogatory’ lyrics on Tamil Nadu chief minister J. Jayalalithaa, has not come as a surprise.

Yes, but as it is to be, and as it is, the anger and the outrage is pouring all across - including from the political establishments anti to Jayalalithaa.

Activists or people like Kovan or many like him, like, for that matter, Jadavpur University professor Ambikesh Mahapatra who was arrested for circulating emails with cartoons of Mamata Banarjee, the West Bengal chief minister, are not known beyond their immediate field of activity or their immediate geographical spread – before their unjust arrest.

They have every right to criticise anyone within the democratic norms. The Constitution gives them this freedom.

But who takes guarantee of ensuring that when the administration acts on the contrary, compromising the rights given by the Constitution?

Courts have to intervene then like the top court did with Section 66A. But it doesn’t happen in a day and the struggle with the controversial IPC Sections takes years for saner voices to prevail, like we saw in Dr. Binayak Sen’s case.

Why can’t our political establishments accommodate voices like Kovan or Ambikesh Mahapatra or Binayak Sen or many others who have a different conscience than our ruling establishments?

What about culture of tolerance in our political establishments?

This May, the Kerala High Court observedin a case, “Being a Maoist is of no crime, though the political ideology of the Maoist will not synchronise with our constitutional polity. The police cannot detain a person merely because he is a Maoist, unless the police form a reasonable opinion that his activities are unlawful.”

This and other similar court observations follow from a landmark observation in 2011 given by the Supreme Court while granting bail to Dr. Binayan Sen. The court had said, “We are a democratic country. He may be a sympathiser. That does not make him guilty of sedition. If Mahatma Gandhi's autobiography is found in somebody's place, is he a Gandhian? No case of sedition is made out on the basis of materials in possession unless you show that he was actively helping or harbouring them.” (Here ‘materials’ means Naxalite/Maoist literature.)

If Kovan has done anything that goes against the state then his arrest can be justified but not on the pretexts like his songs are maligning the image of the state’s chief ministers or he is openly criticising the state sops selling liquor/alcohol – especially when ‘prohibition’ has become a sensitive issue across the country.

Kovan’s case reminds me the Marathi movie ‘Court’, India’s official entry to the Academy Awards (Oscars) this year. In the movie, the main protagonist is jailed time and again as police links his anti-establishment songs to the ‘alleged’ suicide of a person, even if there is evidence on the contrary.

Here are links to Kovan songs. I don’t understand Tamil but I am free, and rightly, to express my solidarity.


Shut down TASMAC and Amma TASMAC (Tamil songs – TASMAC is the Tamil Nadu government outfit that runs the liquor shops in question.)

And here is a photograph, sourced from Twitter, showing S. Sivadas or Kovan performing his art. 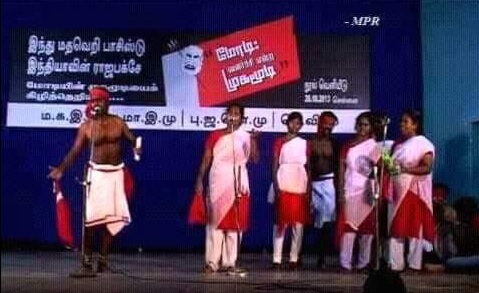