It was a day of scrambles and mad rush - to express solidarity - to show empathy - to look socially up - to sound socially concerned - especially on social media - with many of the so called Twitterati who see their 140 word Twitter presence imperative on anything and everything - and today was an eventful day for them.

Geeta, an Indian girl who lost her way and ended up in Pakistan was returning India after over 10 years. Her story has been the first take ever since it was rediscovered after Salman Khan's movie 'Bajrangi Bhaijaan' hit the theatres. One of the main characters of the movie had story similar to that of Geeta. Ever since the story broke, it has kept India and Pakistan at a platform, at least on her issue.

And that girl was returning India today and it was imperative for many names to come, most preferably on Twitter, to oblige others by letting them know what they thought (even if they didn't think, even if they didn't know the subject matter properly).

And to add to the frenzy of 'Geeta event', two other major news events broke on the day.

The one was arrest of India's dreaded gangster Chhota Rajan in Indonesia. Rajan was on run the run for last 20 years and makes for an important part of the Underworld tales related to Dawood Ibrahim. Okay, it was not so attractive for many in the Twitterati who are always on the look out to look for a development to pour out their hearts.

But the other one was certainly.

The whole North India felt jolts of a massive earthquake today the epicentre of which was in Hindukush region in Afghanistan, some 250 Kms away from Kabul.

Various geological estimates varied from 7.5 to 8.1 on the intensity of the earthquake. The US Geological Survey and the Indian Meteorological Department finally settled for 7.5.

The enormity of the earthquake can be gauged by the fact that though it did not cause much reportable damage in India, its deep tremors were felt for around 6-7 minutes. So far, no direct casualties have been reported, except some unconfirmed reports on two heart-attack deaths or an accidental death.

And every report has been pretty clear about this earthquake impact in India.

And every report, naturally, has been crystal clear about the widespread destruction that the earthquake has caused in Pakistan. And the quake damage in Afghanistan, though not to the extent of Pakistan, is being reported as well.

Yes, the October 26 earthquake is nowhere close to the enormity of the one Pakistan saw in 2005, but is still a major one. The 2005 quake was a shallow one, causing widespread damage while this one is around 200 Kms deep.

But still, there have been reports of loss of property and lives from various parts of Pakistan. So far, the death toll has already crossed the 200 mark and the figure is expected to go much higher as many remote areas still remain unaccounted for.  Pakistan's prime minister Nawaz Sharif, who is in London, is immediately leaving for Pakistan to manage the rescue and relief efforts. The army in Pakistan has been pressed into operation.

So, if there has been significant destruction from today's earthquake, it is from Pakistan and certainly not from North India.

So, when I saw this tweet, it naturally caught my attention. Incidentally, Vijay Mallya retweeted Kiran Mazumdar Shaw on the quake:

Vijay Mallya retweeted
kiranshaw's avatar
Kiran Mazumdar Shaw @kiranshaw
Heartfelt condolences to all those families who lost their lives in the massive ‪#‎earthquake in North India. 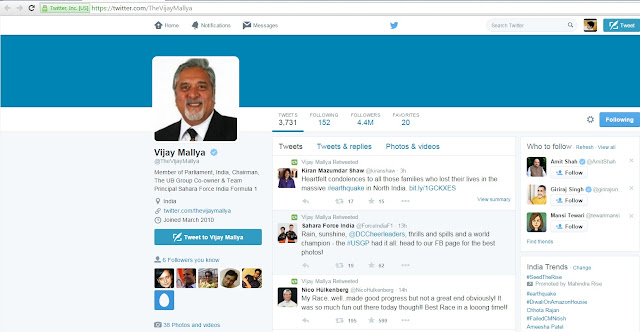 Kiran Mazumdar Shaw tweeted it and Vijay Mallya retweeted it. The tweet shows how disconnected and indifferent these super wealthy are!!

They probably just saw the headline only and didn't bother to go inside or didn't care at all than expressing her (or their) Twitter sorrow.

Kiran Mazumdar Shaw gave link to this write-up in her Tweet that very clearly says what was the context. Here is the screenshot: 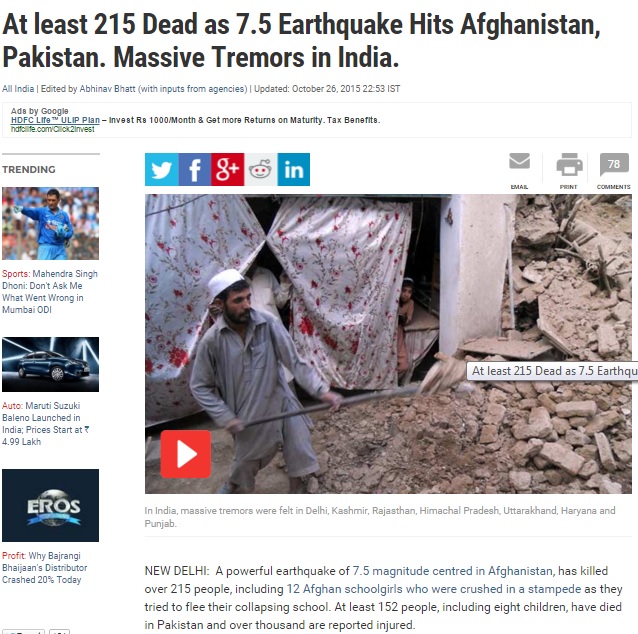 I can write so because I wrote back both to Vijay Mallya and Kiran Mazumdar Shaw on their Twitter handles about it but I am yet to get any response while writing this. Anyway, I had not expected any response.

And then, there was another one. I read somewhere an article that wrote that 'how this earthquake left many Bollywood stars shaken' even if Bombay or in other parts of India than North India, the earthquake jolts were not felt.  Anyway, many of them, in their 'wisdom', can say that.