The Hindu says ‘Israel is upset with India’s ties with Palestine’.

Well, the two extremes that may or may not echo in India’s domestic politics.

India’s has around 17 crore Muslims and that makes Palestine a sensitive issue, but then we also need to consider this that the ‘Palestinian cause’ doesn’t reflect to that level in our day to day politics to make a domestically sensitive issue, at least at the visible level.

Israel is critical for India’s defence needs and can supply some of the most advanced defence tech, irrespective of what the world community says and is certainly on Prime Minister Narendra Modi’s radar.

And India tries to do that, at least in dealings at international level, in international politics – for principles – for compulsions. It tries to stem concerns of the Muslim community back home and the larger Arab world, the traditional anti-Israel block.

President Pranab Mukherjee just concluded his historical visit to Palestine and Israel before Narendra Modi’s planned Israel visit later. And though it will be a milestone since any Indian prime minister is visiting Israel for the first time, there are already concerns and debates on the line that whether Narendra Modi would include Palestine in his itinerary.

Now, whether that is in Modi’s mind or not - we need to wait and watch – for his official itinerary.

So, when I saw this poster during a random excursion trip, in a place inhabited by many media outfits of the country, I felt amused – for obvious reasons. 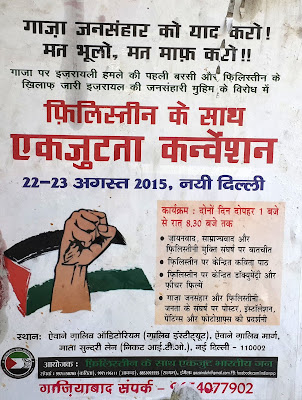 It might have been an exercise, placing it there, to catch some eyeballs, something that didn't work. And anyway, such routine exercises by these so-called outfits didn't go out of conference halls where the event is held. And we all know why such events are held.

Yes, solidarity with Palestine is a principled stand that India has always taken, and has taken rightly, and the country will find it hard to balance the Israel-Palestine ‘hyphenation’ in the days to come.

But the same is not expected to bring upheavals in our domestic politics and the society it is aimed at.