“..and how that one long night was actually ten violent years in the making.”

“I thought I was doing the right thing.… I'm sorry that I let you guys down.… My count is 20 [the number of Afghans he believed he'd killed].… You will thank me come June [the height of the fighting season].… We shouldn't worry about collateral consequences.”

These lines from an extensive GQ interview of Robert Bales, a US Army soldier sentenced for life without parole for 2012 Kandahar Massacre, again reaffirm what protracted wars do to a man, tasked to ensure that the soldier in him must conform to the war doctrines laid out by his superiors.

By the very nature and movement of geopolitics globally, the United States of America has been involved in most of the wars post World War II. And in all these wars, it has been an outsider that has taken the role of the main insider – at least in the combat zones.

And has sent countless soldiers to the war fronts – many of them have lost their lives while serving their troops.

And it has not been without its repercussion back home.

The US has seen widespread backlash and domestic protests over loss of American citizens, beginning from the first mass scale intervention post World War II, in Vietnam. The domestic sensitivity of the issue continued with Iraq and Afghanistan intervention. And the enraged public opinion deterred further efforts by the US administration to adopt ‘similar interventions’ in crisis torn Middle East countries and in Iraq in this round. The ‘enraged public opinion’ in fact was the reason for the ‘much hyped pullouts’ from Iraq and Afghanistan.

But war does much more than killing soldiers.

Protracted wars like the ones in Afghanistan, Vietnam, Iraq and again in Afghanistan change soldiers in killing machines who don’t see beyond taking orders from their superiors, who in turn, are pawns and dices in a larger global geopolitical game.

The GQ write-up says quoting Bales’ lawyer, “The government is going to want to blame this on an individual rather than blame it on the war,” he said during a press conference. His instinct was to argue that Bales snapped under the pressure of four deployments and was not in his right mind when he committed his crimes.”

The GQ interview further spreads out, “Part of PTSD is dissociation,” says Charles Golden, a neuropsychologist who wrote a report on Bales for the defense. “The person feels like he's watching himself or outside himself—he's not himself. And head trauma—we don't have a lot of research on that—but head trauma may exacerbate that tendency to dissociate when under stress.”

Years of violence, as Bales puts here (ten violent years), make soldiers like Bales (and there have been and there are multitudes of them) savages objectified with ‘taking human lives’. Coupled with the emotional loss (and healing) of working away from home and family, in an alien land, in the lap of death, they quickly unlearn the basic tenet of all human civilizations – live and let live. Disregard of human life, of their own and of others, takes primacy on every other ‘conscience consideration’ in the mind of such soldiers – as Bales rightly says - “No conscious person wants war. No conscious person wants to kill people.”

I did not decide to write the article here after reading this GQ interview. What Bales did can never be justified. The savage in him has no place among us. But why he did so, and why others like him do so, must always be looked into, must always be reasoned with, to realize ‘horrors’ of war.

It is just that I had just finished watching ‘Apocalypse Now’ once more and this time, I was thinking to write something on it, and was mulling over my thoughts when I, by chance, came across this write-up. And I found it quite a relevant one – aiding and adding to my thoughts. 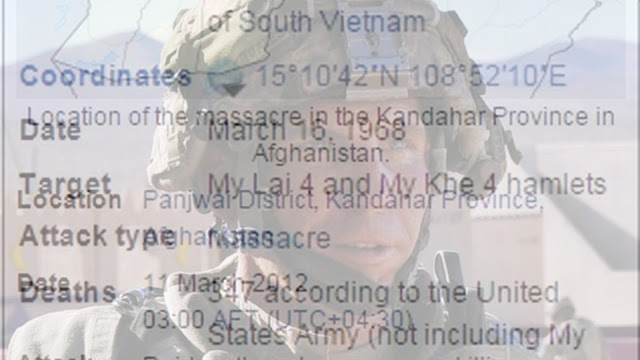