DALIT ASSERTION THIS WAY! WHAT'S WRONG IN THAT!

We cannot shy away from the fact that in spite of almost 70 years of Independence, and over six decades of legalized affirmative action, that was extended from such measures present in our colonial history, we have failed to bring majority of our Dalit population (the Scheduled Castes or what Mahatma Gandhi named them - Harijan, i.e., people of God) into the mainstream.

They still live in such places like along sides of city drains and slums in big cities, along railway tracks or on outskirts of cities or in separated, closeted, remote places of towns and villages.

After such a mammoth failure, we should not have any right to question them, to advise them to behave as some of their acts, like this Valmiki Jayanti procession, disrupting the normal traffic, causes inconvenience to us.

After all, it is not new to us, with so much of VIP culture or VVIP elements enveloping our day to day lives. Traffic inconveniences or for that matter, any other sort of bad public experience in our day to day lives, are so ingrained now that we take them as routine - during our countless festivities or routine traffic diversions due to VVIP movements.


So, why should we question them, especially when they get these not so regular events to enjoy some moments of life - to enjoy life in those moments. We can wait a bit to let them pass, dancing and singing, celebrating their lives in the ways they deem fit. Constitutionally they are equal and socially and righteously, we should treat them as our equal brothers. We owe them because we have failed them. 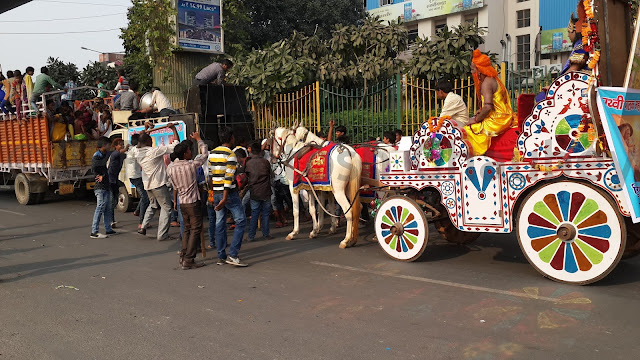