JANMASHTAMI IS STILL A COMMUNITY CELEBRATION BUT..

Today, as we know, and as we all must know, is Teachers’ Day – that is on birth anniversary of former President Dr. Sarvapalli Radhakrishnan (and former Vice-chancellor of Banaras Hindu University, my alma mater), and is also the death anniversary of great human-saint Mother Teresa.

But this year, the day has become even more special because the country is celebrating Janmashtami 2015 on this Saturday.

The same holds true about how we celebrate our festivals.

In our childhood, and even in teens, Janmashtami happened to be a community celebration where almost each household participated. Jhankis (tableaus) were created in almost every house in our locality. We would start preparing the day well in advance. Everyone in the family would be given or would take some responsibility.

Krishna is a mystical God but then it takes precedence of spiritual elements over ritual practices of religion to feel so, which the ordinary, worldly people seldom realize. Anyway, Krishna Janmashtami, that is celebrated as Krishna’s birthday is never heavy on ritual and is quite flexible.

Krishna is born in every household at midnight - as our scriptures say. And the rituals that we perform during birth of a child in our house are performed then. This part was for family’s elders, especially my mother and father.

But every step leading to celebration of the day was my favourite, topped by creation of different jhankis – depicting Krishna’s birth, Vasudev taking him to Yashoda’s house, various stages in life of Krishna with Kansa and his demons and various other tableaus to depict what my childhood would think about then.

I loved making mountain from black stones that I collected from factories in Varanasi’s industrial area. Krishna’s idol is placed inside a large-sized cucumber and after his birth at midnight and the ritual bath; he is placed in a cradle, adorned with new jewellery and clothes. Then, when we used to spend at least a week preparing to celebrate the birth, we would place branches of Carissa (Karonda), with plenty of leaves and fruits all around then mountain (created from stones) and around the cradle.

We would also run from this saw mill to that saw mill to collect sawdust and wood filings. We would then colour the same in different shades and use them in different tableaus – as the base (or the ground). Normally, one tableau would be separated from the next with small wooden blocks and colour of the sawdust.  Sometimes, in some homes, coloured sand was also used, though I never used it.

Many small tableaus of different colours and with different themes together formed the grand ‘jhanki’ of every family. Sometimes, it took two days to start and complete the final decoration with all tableaus conceived and created.

On the day of Janmashtami, in the evening, we would go to every house to see how the other fellow has done – that how his jhanki was better or dull than ours – that what he had done that we also could have done – that what was his scale relative to ours – a childhood mind primarily thinks in these terms after all.

The ‘ritual part’ and ‘prasads’ that follow are still there but the part (or the parts) and took many days of preparation, in creating many tableaus for a grand ‘jhanki’, slowly and gradually went out of individual families. I don’t remember when we stopped doing it, but I know that probably no house in my locality does it so. I have heard similar echoes while conversing with people on similar lines.

Janmashtami is still a community celebration and is still worshipped individually in almost every Hindu house, but the community nature of its celebration through individual houses, through jhankis, slowly and gradually, stopped being there. 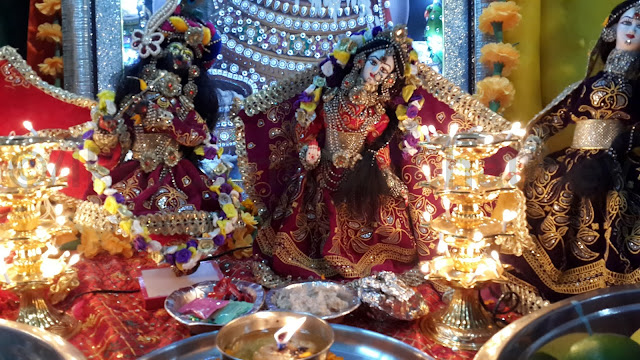