JULY 1: WORLD IS SURE OF HONG KONG'S RESILIENCE TO WITHSTAND CHINESE PRESSURE

July 1, the day comes every year. But for Hong Kongers, the day has increasingly become an occasion to reflect on what their protests have been so far - to think what they should do ahead.

Hong Kong was 'handed over' to China on July 1, 1997 under a British-Chinese agreement that laid down certain conditions for the city-state and former British colony. For Hong Kong, a 'one country two systems' norm was set up and China promised to give the citizens universal suffrage in a phased manner.

But that was just the story as it was thought to be. The reality of the day is starkly different.

Since its takeover, Beijing has been trying to impose the culture and the system of the mainland on this global financial powerhouse. Chinese national anthem is being more and more used. Sometimes, Beijing tries to introduce elements like altering textbooks. One of the regular features is propping up and supporting pro-Beijing lobby of politicians and pro-Beijing group of local Hong Kongers. And the most prominent of Beijing's efforts is a panel of pro-Beijing politicians and its chief executive officer that governs the administration in the city state.

Beijing has even tried to show Hong Kong that the mainland can do better on the parameter Hong Kong has been known globally for - the economic might with a global financial pull. Beijing tried to do that with Shanghai and its stock market last year but failed in its attempt.

Majority of the Hong Kongers, who make the city-state population it but who are in minority in the ruling elite, are worried of the designs Beijing is trying to impose.

Hong Kong always maintained a culture of free speech and expression in an otherwise oppressive dictatorship that China has been and is. Tiananmen massacre incident is a taboo subject in China and many in the generation now see it just a political incident from country's past. But Hong Kong has always maintained the spirit of June 4 Vigil every year with remembrance march and associated events to commemorate the brutal crackdown by Chinese leadership on students and political activists on June 4, 1989. Hong Kong's Victoria Park echoes the global sentiments on this day, be it the British rule or the Chinese autocracy.

Obviously, Beijing does not like it. But it cannot openly do anything about it. So, the other way is to try and prop up elements that support the Chinese viewpoint as is on the mainland. In spite of its sociological problems around income distribution, Hong Kong is still a financial powerhouse and an important global connect centre for the Chinese economy. Beijing realizes it and cannot, therefore, impose itself forcefully on Hong Kong.

So, even if it agreed to give universal suffrage to the residents of Hong Kong, it came with the rider that Beijing was going to be the ultimate holder of power. Hong Kongers are free to elect their next leader (chief executive) in 2017 but they are not free to elect 'whom to elect' - that is what Beijing had proposed in the name of 'universal suffrage' leading to 'more democratic rights'. The Beijing proposal that was voted down on June 18 by pro-democracy legislators after an intense debate of two days required Hong Kongers to elect their next chief executive from a panel of three names 'shortlisted by Beijing'.

Now that the proposal is struck down by the pro-democracy groups, the old mechanism of electing the next chief executive would be followed in 2017 - sans any pseudo-democratic assurance. A pro-Beijing electoral college of few will install someone who will be no more than a Beijing puppet, the case now. And that would be without any spectacle of 'democracy'. And it is routine business for Beijing administrators in China. They have been far more ruthless in crushing dissent on the mainland.

When the pro-democracy protesters were gathering for their march on July 1 'handover' day last year, they were talking about the way ahead on pressurizing Beijing for a 'true democratic' proposal. The mood on that day was optimistic and resilient about fighting ahead as the Beijing's proposal was still not in.

Beijing did what it had to do. Hundreds of thousands took to the street to oppose the 'autocratic proposal' in the garb of democracy'. Protests, that were named Umbrella Revolution, raged for months. The civil disobedience nature had few incidents of minor violence. But, as expected, Beijing did not relent.

This year, on July 1, the mood is driven by the developments since then. With the so called 'democracy proposal' by Beijing struck down, the political deadlock is in the air. Protester are very clear now that Beijing will not relent, not in the near term and their 'struggle for democracy' needs to go back to the drawing board at the thought level to decide on what they have to do ahead. The multitude of such thoughts, reflecting on the developments so far, will come with a spontaneous response ahead. The world is sure of that.

Here are some of the photographs from today's march: 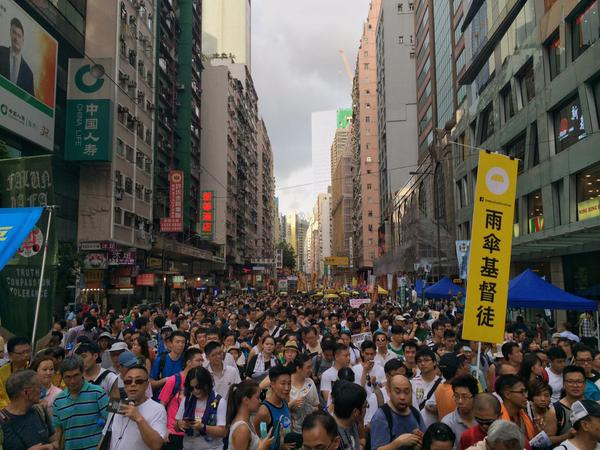 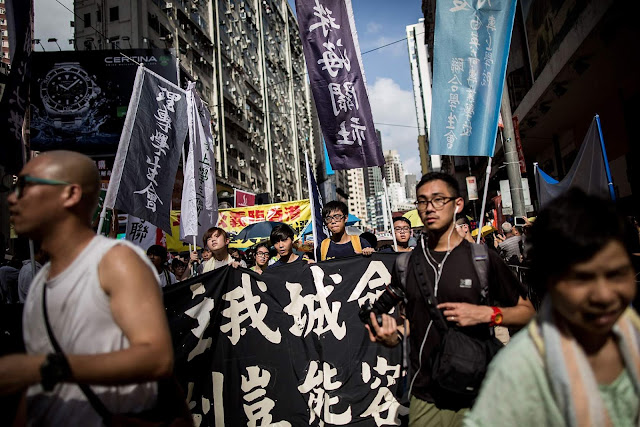 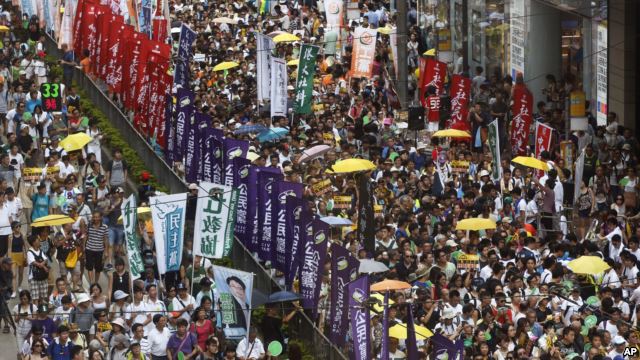 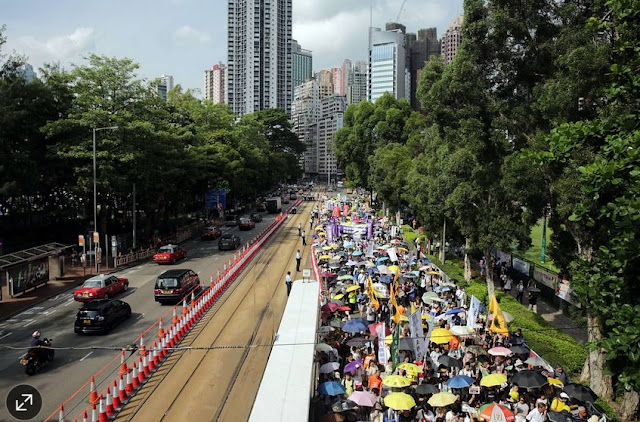 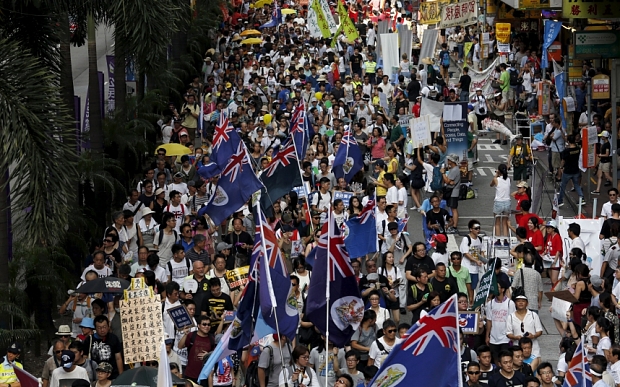 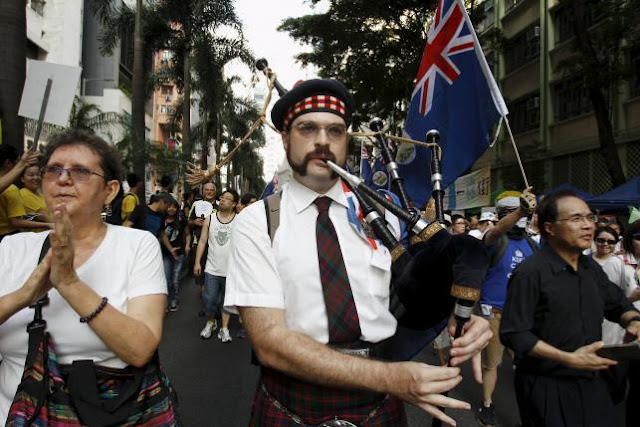 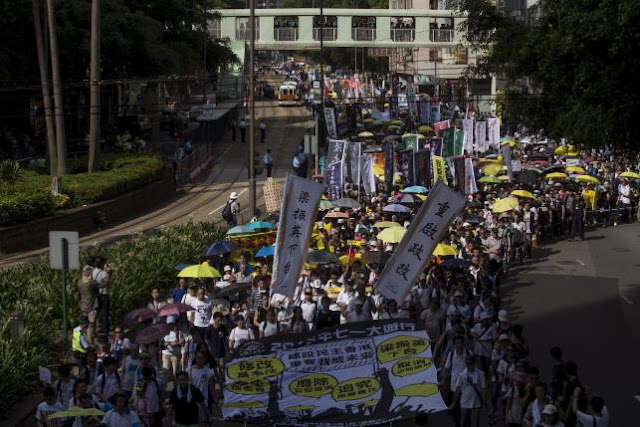