GO DIGITAL, BUT NO DIGITAL IDENTITY FOR NITI AAYOG YET, AND IT GETS GOING TOMORROW

NITI Aayog (National Institution for Transforming India Aayog) convenes tomorrow for its first meeting after its establishment notification on January 1, 2015, but where is its website?

On the eve of the first meeting of the Aayog, a Google search returns with no link to an official website, neither its Wikipedia page shows link to any official web address.

Planning Commission is in archives now, and a new structure with a new name, envisaged to be a new dynamic organization for the needs of a changing India, is here to replace it.

There were logics against and in favour of dismantling the structure, though there was nothing wrong in doing so if a government willed to reform the policymaking behemoth did so after it’s priorities found revamping/replacing the structure with a better one would serve to meet the ends more efficiently.

No one can question this prerogative. And even Montek Singh Ahluwalia, the previous (and the last Planning Commission Deputy Chairman), a close friend of the previous prime minister Manmohan Singh, has spoken positively about it saying it a welcome change.

And Narendra Modi has been quite emphatic while speaking about it. He had tweeted after the notification to express his firmness behind the move – “Through NITI Aayog, we bid farewell to a ‘one size fits all’ approach towards development. The body celebrates India’s diversity & plurality. Having served as a CM in the past, I am very much aware of the importance of actively consulting the states. NITI Aayog does precisely that.”

The official statement by the government summed up the prime minister’s vision – NITI Aayog will serve as a think tank of the government as “a directional and policy dynamo” and will advise the Centre and states on key policy matters.

We hope the Aayog (commission) will be on the job right from the day 1 even if the government, that is high on digital agenda with its Digital India initiative, focusing on making smart cities, building rural internet highway and taking the government to the public through digital connect reducing the paperwork, has not been able to bring a website for NITI Aayog in 36 days (logically, it should be and it would be a ‘work in progress’ – but – we don’t know and we can’t say if the website is in making and if is in making, then the extent of ‘work in progress’ is not in public domain).

As NITI Aayog still doesn’t exist in the digital world, the natural reaction is to click on the Planning Commission link while searching for it.

The Planning Commission link returns with a static page with two further links. One link redirects to a Press Information Bureau press release on ‘government establishing the NITI Aayog’ and the other takes us to the ‘archived Planning Commission website’. 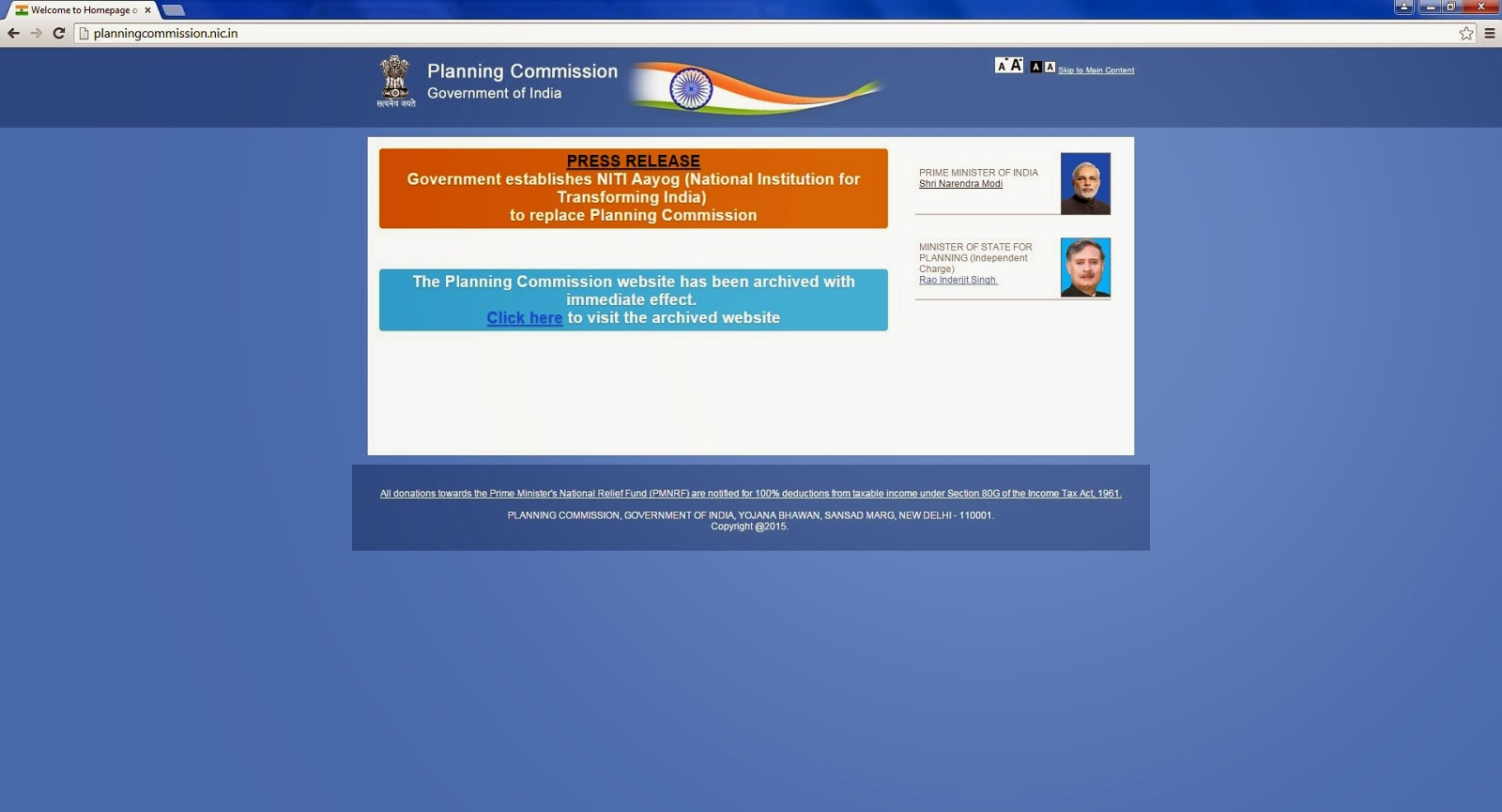 But clicking on the ‘press release link’ returns with a PIB page that talks about a press release on ‘reconstitution of Empowered Committee regarding setting up of Semiconductor Wafer Fabrication (FAB) manufacturing facilities in the country’ and not the press release on the ‘Indian government notifying NITI Aayog’. It looks bizarre here and is certainly questionable by the standards of the digital-savviness of Narendra Modi. 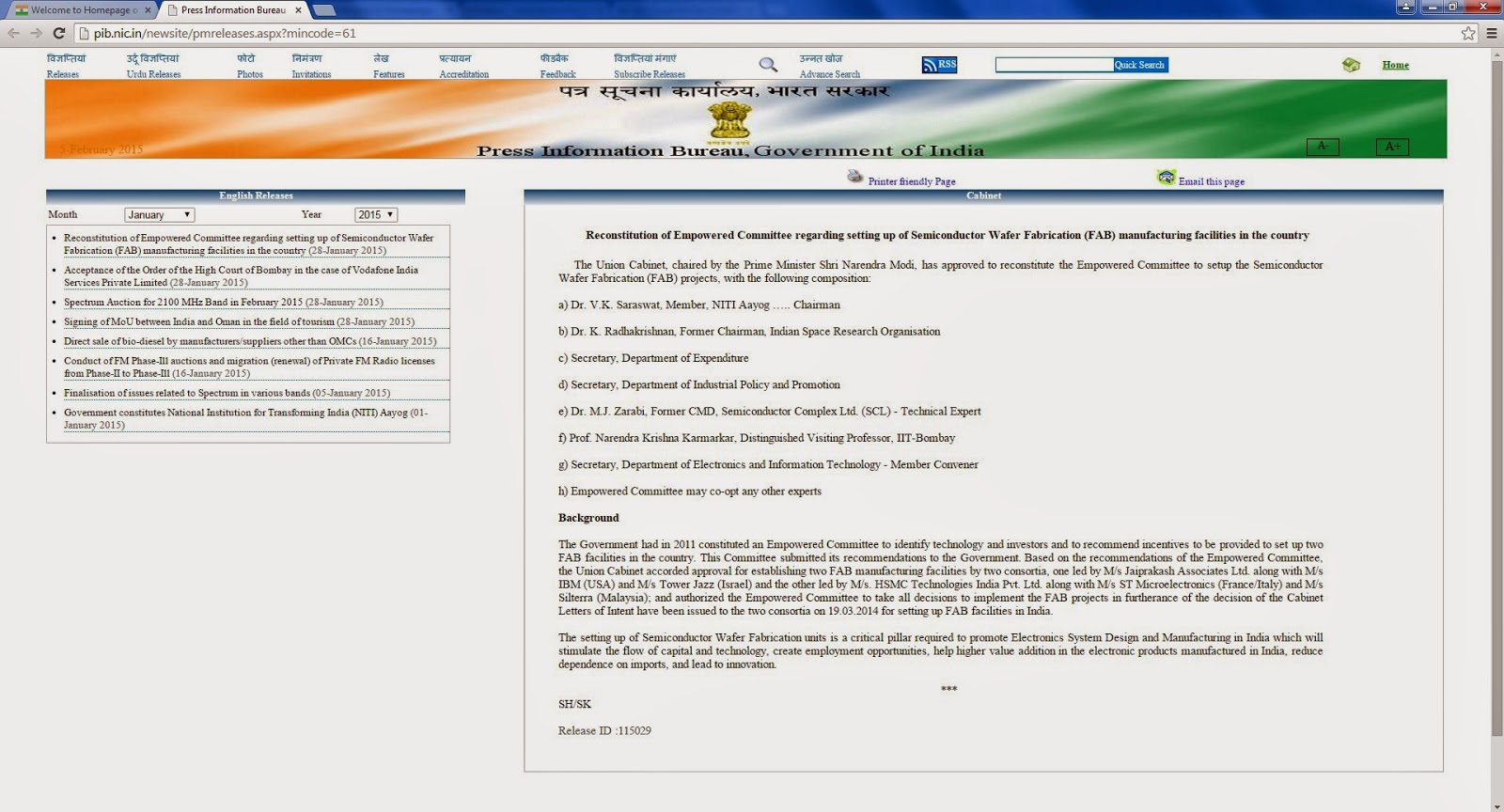 While the ‘behemoth of the past, Planning Commission, that had become redundant’, has a good looking, clean webpage for its archived content. 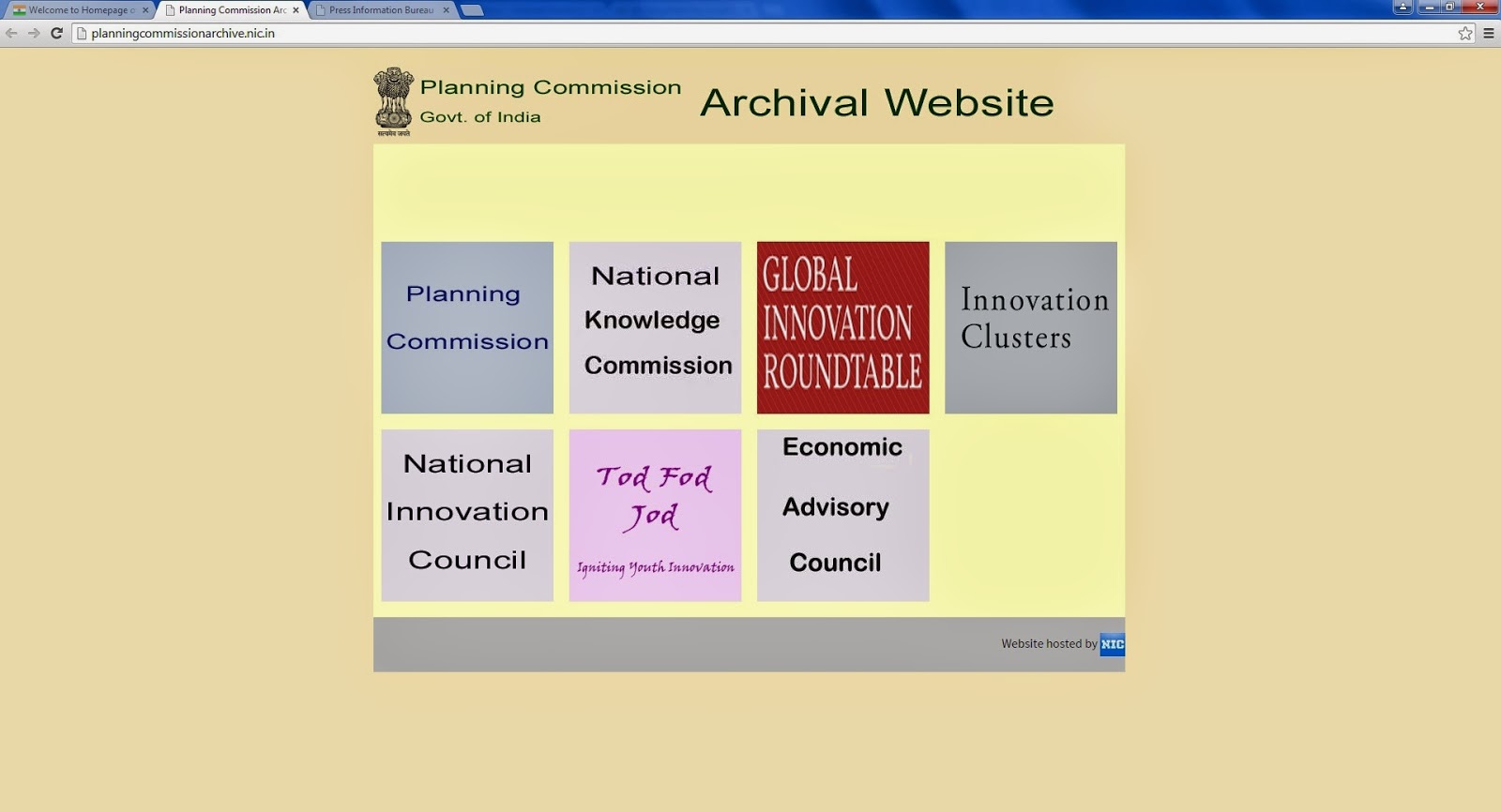 Let’s hope the ‘work in progress’ is now complete and the government springs up the ‘needed surprise’ tomorrow putting the website on air when Narendra Modi holds first meeting of NITI Aayog, otherwise it will always remain a serious omission on the whole ‘digital emphasis’ and will always be questioned.

Planning Commission to NITI Aayog – the think tank with the dynamism of the new age – it has been envisaged so. Let’s see for the vision with which it evolves and a good, communicating and connecting website is the first ‘must’ with a ‘Digital India’ vision of governance.

Will it be there tomorrow?