Last week, when my sister clicked this photograph in Shirdi and sent me, the first thought that came to my mind was similar to what she had her in mind as well while clicking it – ‘Bambaiya Mithai’, the sweet from Bombay.

It’s not that it was after a long time that I had seen it. This one is a famous street confection made from sugar (and air) and vendors can be seen selling it, in streets, on beaches, on busy tourist spots, near public hangover spots and during festivities. It is children’s favourite but elders love it as well.  Yes, I don’t remember when I had it last time after my childhood, but that doesn’t make for any story here.

Coincidentally, when my sister sent it through Whatsapp that day, the frame of the TV I was watching was showing a character eating it and calling it ‘Budhiya Ke Baal’, the old lady’s hairs. 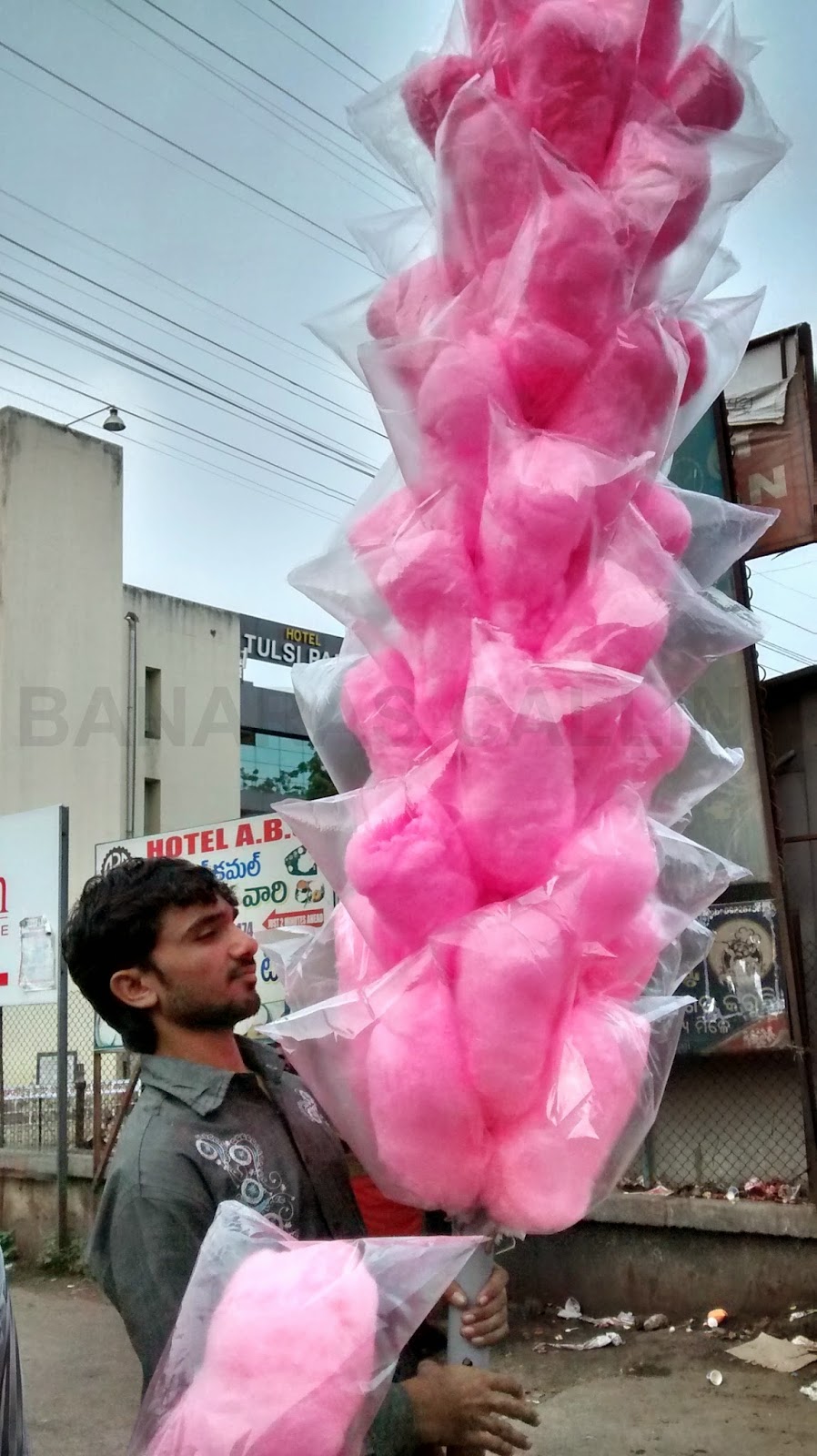 I cannot say if I hadn’t heard the term before, but I could not recall it. For me and my childhood in Varanasi in 1980s and early 1990s, it was the pinkish sweet ‘Bambaiya Mithai’. We were told so by the elders. The vendor would tell us so. And our curiosity never went beyond imagining and being told that the sugary sweet originated from Mumbai (Bombay then).


The little sweet bagged memories of cotton candy, as it is called universally, much beyond our Bombay link, was available to us mostly in small plastic pouches, unlike the big ones as shown in this photograph. It was not that the bigger ones were not available then, but were always a luxury. Even the street vendor would not bring the big sized ones in his stock as very few would buy them.

Later, during our senior school days, we came to know about this spun-sugar confection was European in origin and was not available to all as its preparation was difficult. But the machines in the 20th Century made it a household name, so much so, that in Varanasi, thousands of miles away from the European cities, we would call it by a name that was in no way related to it.  We also came to know that the sweet was available in different flavors and colours.

But, for us, in our childhood days, it was the small pink heap, prepared from thin strands of liquefied sugar, that weaved into our memories our purest of childhood emotions, the innocence to think of that small packet not costing much as the most prized possession of the moment.

The small packets of coloured spun-sugar were one of the spinning wheels of our edacious excursions. The childhood appetite is always big for such delicacies and being made mostly of air, our ‘Bambaiya Mithai’ was always insufficient to quench our desire for it. Added to it was the rationing imposed by the elders in the family.

This photograph and the TV frame brought back those memories and I responded back to my childhood with smiling thoughts on its inquisitiveness on ‘Budhiya Ke Baal’ and ‘Bambaiya Mithai’. I did some secondary research but the only Hindi name that I could come across for cotton candy was ‘Budhiya Ke Baal’. Not a single page showed any related information on ‘Bambaiya Mithai’.

True, I was long aware that the old lady’s hairs got first trimming and shaping in Europe, I never got bothered about its Hindi name, in my mother-tongue. And now, I came to know that the name we called it by had no rational to exist.

And it was not that only the kids (including me) in my family called it so or only our vendor told us so or only our elders passed on the name, everyone in our locality and acquaintances were familiar with this Hindi name only.

So, it was baffling on how come this Bombay connection came into the picture and made its place in memories of many childhoods and in an area far away from Bombay?

Anyway, I will try to find it later and also the possible fairytale behind it. Now is the time to wind up the writing and finish the new book by Henry Kissinger.