CHACHA CHAUDHARY’S PRAN IS NO MORE

Chacha Chaudhary’s mind works faster than a computer.
When Sabu gets angry, a volcano erupts somewhere (at a distant place).

Okay, so, those were the days that came to revisit me today with the news of passing away of cartoonist/illustrator/writer Pran last night.

Why cartoonist Pran only and not any other writer echoes when it comes to remembering the interesting, fun-filled, thrilling and the must-have world of thoughts built by the characters of the comic books (or comics that we would say in those days) that my childhood had is enough to tell me what sort of legend Mr. Pran Kumar Sharma was.

Almost everyone from a generation that didn’t have access to satellite television, superhero movies and the world of sophisticatedly designed animated movies and TV shows had grown up reading the comic books of a series of characters published by publishers like Diamond Comics, Raj Comics and Manoj Comics and Chacha Chaudhary led the pack.

Originating from a Hindi speaking belt, the comic books of Chacha Chaudhary were translated into many languages. The comic strip was further adapted for animated and live-character shows on TV. Also, Chacha Chaudhary’s mind that worked faster than a ‘computer’ that we would be reminded of multiple times in a comic book was among the earliest and the most frequent reference to computer in our lives in those days.

Before stopping reading comic books suddenly one day (the reason I still don’t know and never bothered to know), during my childhood days, I was an avid reader who tried to maintain his lead over the pack of his friends in reading and sharing a comic book as soon as it hit the stands.

We all were subjected to intense scrutiny in our families on our commitment to the comic books that was certainly having an upper hand than the academic books. Parents and elders were always on alert on what we would be reading. And we would always try to devise ways to hide the comic books away from their eyes. Chidings were the regular byproducts. But it never let our spirit down.

To read first and to read each forced us to share once we finished the one with us. Buying was not an option (an option exercised rarely, for some special edition release) given the pocket money that was in fact no pocket money at all. Borrowing and renting saved the day for us.

I still remember many characters. I read the Indian characters as well as the imported ones like Archie, Phantom and Mandrake, much like a spirited reader. Spiderman was accessible through a 15-minute weekly animated show. Superman was heard just in passing references.

But, now after so many years, if any character from those childhood days is still clearer than others in my memory is, it is Chacha Chaudhary. 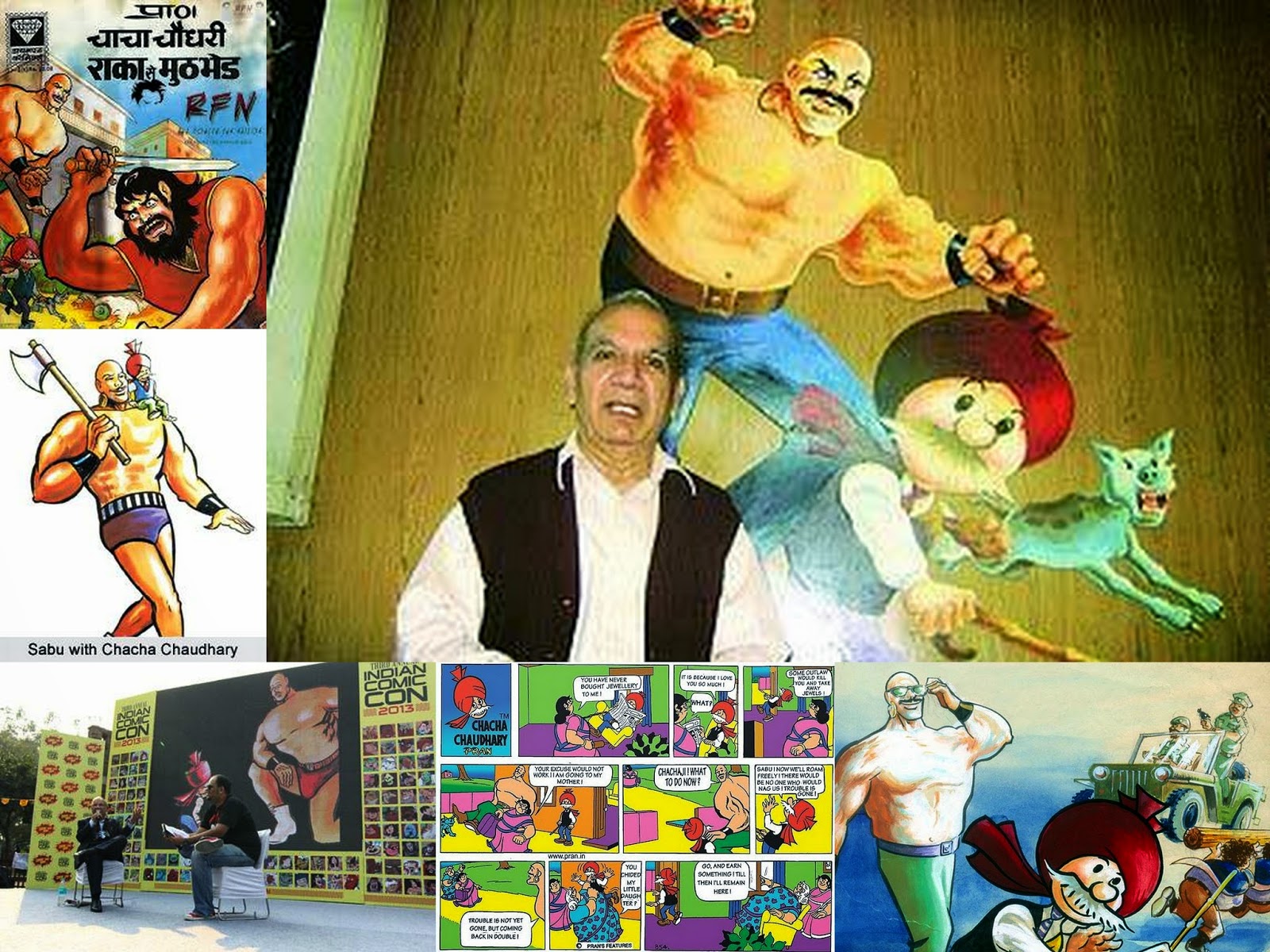 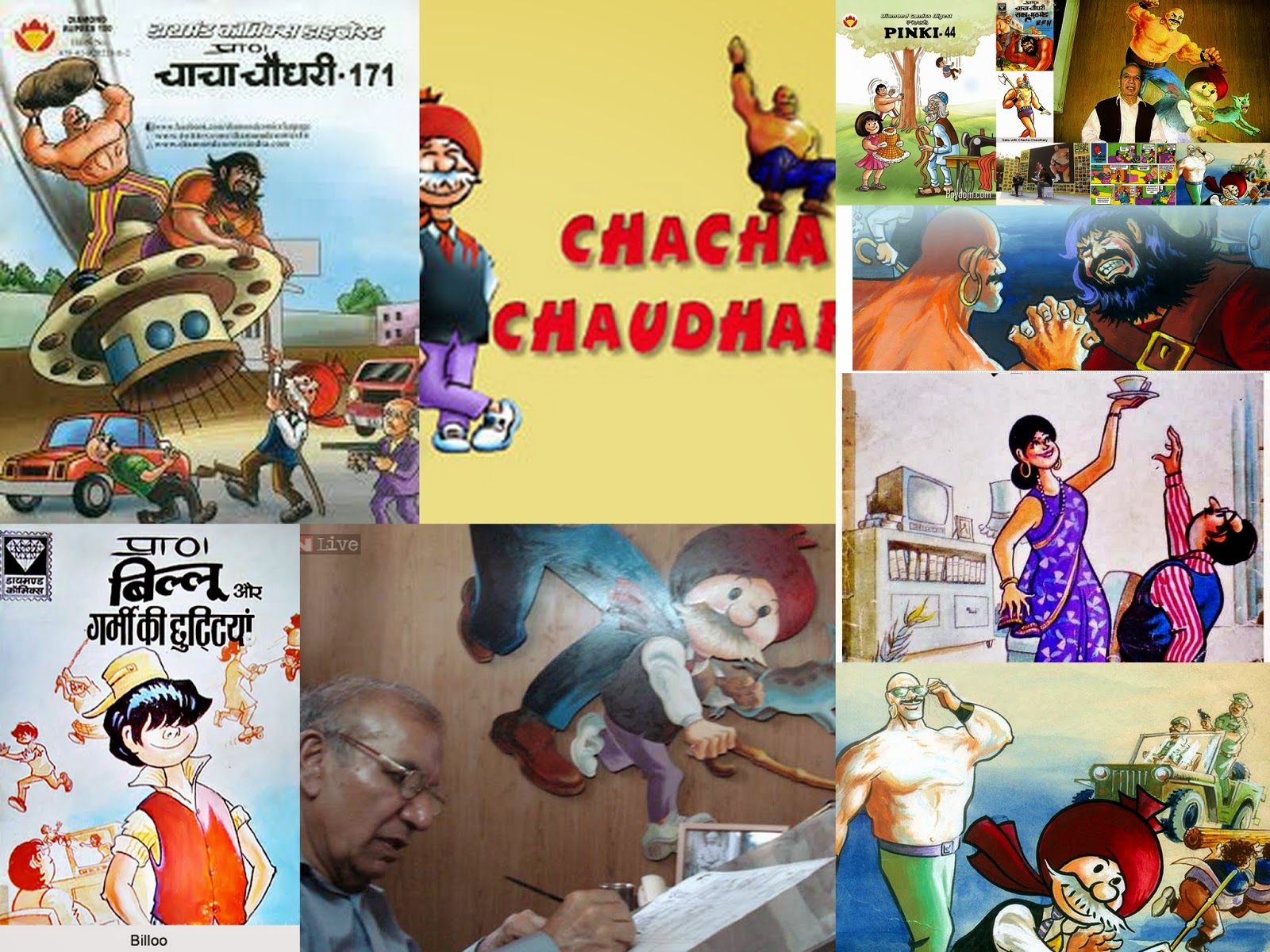 (Photographs sourced from the Internet)

The red turban, the bushy but shaped white moustache, the black, blue and white outfit and the walking stick – the quintessential Chacha Chaudhary – with his lieutenant Sabu, the 15 feet tall alien with a monstrous diet, who came from Jupiter to stay with him – and their archrival, Raka, the dreaded villain with his axe (Wikipedia says: Raka to Chacha Chowdhry is same as Joker to Batman) – and we had ‘many returns’ of the good days packed with thrill and humour - humour, something that was central to Pran Sahab’s work.

And that Pran Sahab, who gave us this Chacha Chaudhary, Sabu and Raka and many others including Chacha’s wife Bini Chachi, his brother Chhajju Chaudhary and his dog Rocket, and other independent characters like Billoo, Pinki, Shrimatiji and Raman, is not there anymore to further his already deeply entrenched legacy but our memories of his characters will remain there, always.

Thanks for being the essential part of the childhood memories..

A volcano would have certainly erupted somewhere on Jupiter yesterday.