Sir Richard Attenborough – The Right Honourable – or the Attenborough who gave us, the Indians, and the world the timeless biopic, the movie GANHDI, his dream project, a historical achievement, a creation for the global humankind to serve as one of the primary introductions to the 20th Century great who is to remain the icon of the humanity in the centuries to come – Rest in Peace Sir (August 29, 1923 to August 24, 2014)


I am reproducing here, with some changes, my article on ‘Attenborough’s Gandhi’ written on the birth anniversary of the Mahatma (Mohandas Karamchand Gandhi) on October 3, 2012.

Yesterday’s (October 2) the Times of India had a small write up on Sir Richard Attenborough reminiscing about the making of the world cinema milestone ‘Gandhi’ on the birth anniversary of the Mahatma. He focused mainly on his selection as the director of the project as well as the casting of the movie. He said Naseeruddin Shah was the most recommended name for the role of the Mahatma but his search took him to Sir Ben Kingsley.


And Kingsley proved him right.


I am not a film-buff but I love cinema when it comes to the shades of the visual language. My collection is made of good stuff from the world cinema and I enjoy the quality time watching and thinking over the masterpieces. And I can say ‘Gandhi’ is the movie I have watched the maximum number of times. It is one of the prized possessions in my library. The movie is a ‘must have’ for anyone who cares for values and teachings of the Mahatma and prides in having his works as collectibles.

The movie is unique. In spite of the ensemble cast and thousands of extras (with Guinness Book record making 3,00,000 extras in the funeral scene of the Mahatama), the movie delivers extraordinarily well. Very few movies with such a scale of production in the world cinema have done so.


Much has been written on the Mahatma and much is being written. There have been many movies made and being made on him. His teachings and views have been translated into many languages. He reaches to the world fraternity of the day through the words, written and spoken. And for the world audience, the ‘movie’ Gandhi features prominently there, as the gateway to introduce the Mahatma to them who are still not aware of him but want to know about him. It is true of many Indians as well.

The film is an example of the craftsmanship by a master storyteller. Every shot is an inseparable part as if the movie could not have been made about it. Its every frame is a study in point. You can study the use of lighting, of camera angles, of the dress designing, of the sets and locales, of the props used to support characters in every frame, and a brilliant use of the background music. It is a management case study on Epic filmmaking. But two aspects stand out, the aspects that had the most direct bearing on making the movie a masterpiece. 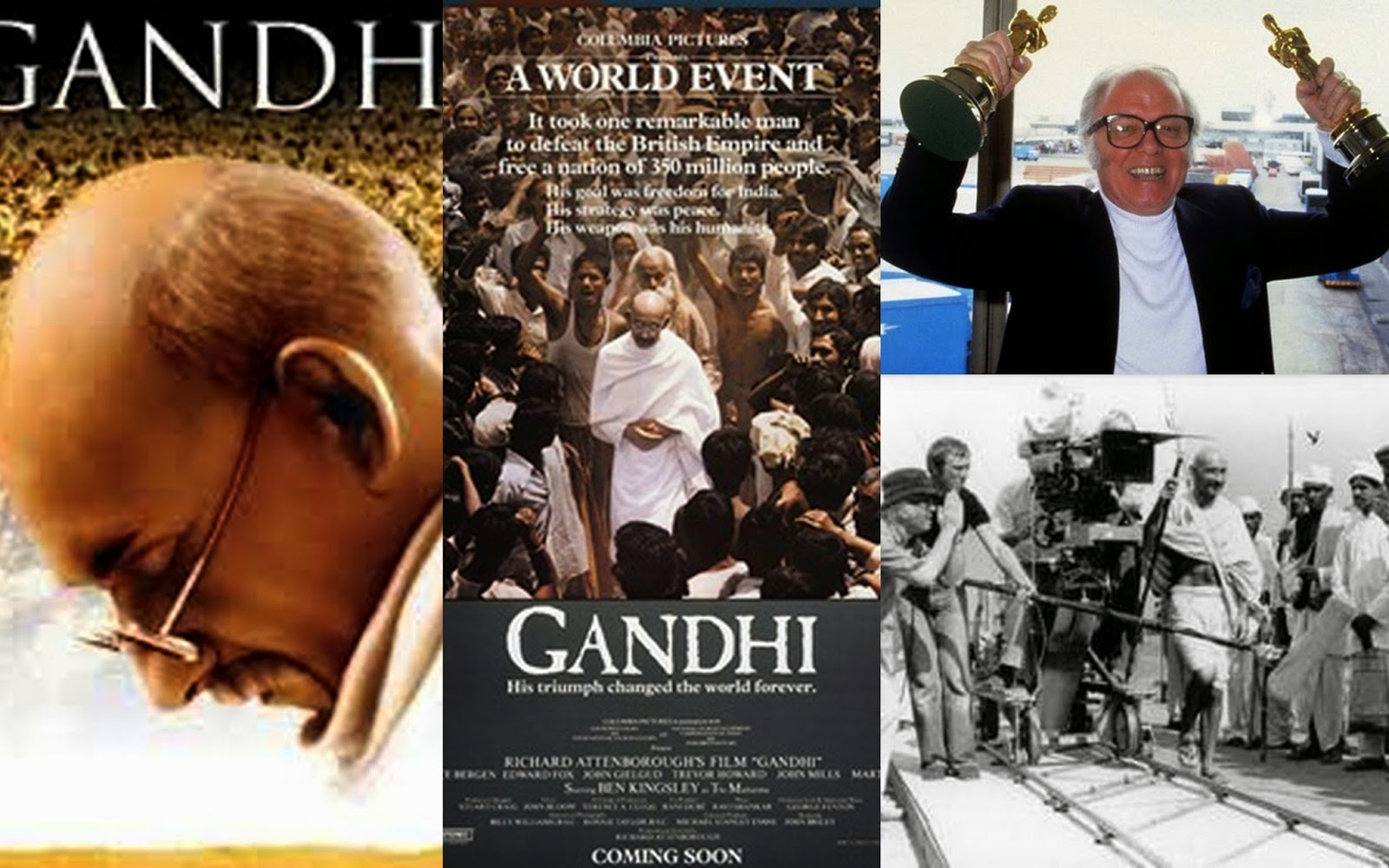 One is the use of specific incidents from almost four decades of Mahatma’s life in India after his return from South Africa. Four decades is a long period and given the fact that India’s freedom struggle had become synonymous with the Mahatma, it was really a task like finding the needles in the haystack of multiple defining moments of the then Indian history. And Sir Attenborough has done it with such a craftsmanship that we never feel jumbled up when a frame transitions to the other. Remember, every frame in this movie had to be a meticulous selection of consistency and relevance of different time-frames spread, sometimes, over the years.


The other important aspect is the way the characters relay the visual language. Everyone is perfect in the role given but Kingsley mesmerises. Not even for a moment we realize the actor playing the role of the Mahatma is a British and not an Indian. Use of silence, sounds and body language enhance a skilfully written script well.


Gandhi standing up, sitting down and standing up again before he addresses the first public gathering in India or the way Nehru’s friends at Champaran convey their acceptance to do what Mahatma asks them to do – simply amazing.


I watch and enjoy the movie scene by scene every time, sometimes going back to a scene more than once. Here is the YouTube link to the one of my favuorite scenes from the movie where the British Justice, in reverence of the Mahatma’s stature, bows down to him as he enters the courtroom.


Thanks for giving us ‘GANDHI’ Sir. You’ll always remain there as long as the Mahatma remains there to stir the human conscience.