THE NORTH KOREAN PURGE – ESCAPE FROM CAMP 14: HE WAS INDOCTRINATED TO KNOW NO EMOTIONS

Today, the United Nations released a report on Human Rights violation in North Korea (the killing machines of humanity I say) recommending strong action against one of the living laboratories of the Holocaust. The report says ‘the world must act’, yet it has been a long, dead spell of geopolitical games allowing people to be butchered, by the idiots like Kim Jong-un or his predecessors.
I am sharing here, today, my book review of ‘Escape from Camp 14: One Man’s Remarkable Odyssey from North Korea to Freedom in the West’ that I had written last may after reading the book, a book (a rare, authenticated, firsthand account – there have been very few cases of prison-camp survivors of North Korea) that reflects on what the report says, on what is happening in North Korea.
It’s straight. No colours. Single-point concentration and just one message!

And it hits sharply.

Family, father, mother, brother, sister, friends – all these words were just faceless, nameless heaps of flesh, devoid of any philosophical meaning of the term 'soul', competing for that ‘always’ meager amount of the foodstuff given twice a day (and that, too, irregularly). The survival of every nameless was mortgaged to the pervert decadence of the savage indoctrination.

He knew no emotions. Getting somehow the daily dose of that meal, which we, in the ‘civilized’ world can never think of even touching, was the only motive to live the next day.  The best survival instinct was betrayal – betray everyone, no trust – get your share of the rotten meal anyhow – midst abuses, whippings, isolations, rapes, sodomy, and killings.

All for no reason – or something that your ancestors or relatives had done!


Blaine Harden’s ‘Escape from Camp 14: One Man's Remarkable Odyssey from North Korea to Freedom in the West’ is a strongly worded, emotive book, running high on the zero-emotion quotient of the central character, written in a provocative language, detailing out the life history and escape from the labour camp 14 of Shin Dong Hyuk who was born and brought up there. 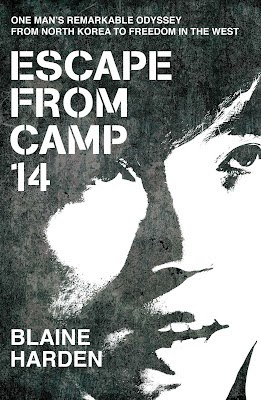 Escape from Camp 14: One Man's Remarkable Odyssey from North Korea to Freedom in the West

The biographical memoir makes you squirm; breaks you into thoughts; kills you by the absence of the thoughtlessness; pins you on the inaction of ‘thinking civilizations’ across the world.

Unlike the concentration camps of Nazi Germany, North Korean camps have survived for over five decades now. Content of the book is indicative of thousands of murders in these camps every year and yet the prisoner count remains the same. It directly tells us the reign of state terror in  has fed on killing millions of its famished population.

But like the Nazi camps, the ‘Selection’ process of the Nazi mentality is very well alive in the North Korean labour camps. In these camps, only two categories exist – prisoners and guards. Most of the prisoners don’t know why they are here. Guards treat them as animals – killing them, for reasons like stealing some grains of corn to getting pregnant after being raped by the guards.

Rooms for inmates are worse than prison cellars. Schools extend just one focused training - indoctrination of limited feelings, extreme fear and utmost devotion to the jokers Kim Il Sung and Kim Jong Il (and now the next crook on the block - Kim Jong Un); schools where teachers kill small girls and boys by beating with blackboard pointer to release their anger.

The only skill imparted is learning to work in the labour intensive prison factories. The etiquettes manual tell never to look into the eyes of the guards and teachers and never question them.

‘Snitching’ is a word that dominates this narration; defines the underlying theme of this book. Every camp inmate is indoctrinated to snitch on others, even the family members that led Shin pass the information of escape plan of his mother and brother to the guards resulting in their public execution. He hated them. He hated his father.

And Shin was not alone. Almost of the camp inmates who had never seen the outside world were the same creatures as Shin was – animals with pervert survival instincts.

The way they had been raised, nothing could change their destiny until they found a way out of the hell – an impossible prospect.

And that is why ‘Escape from Camp 14’ is an extraordinary tale of escape of an animal Shin from the invisible North Korean concentration camps on the journey to become the human Shin.

He feels guilty for his act now that led to the execution of his mother and brother. He regrets that he didn’t say any word to his father on the eve of his escape in 2005. He now knows the feeling behind emotive words like 'family'. One way to begin life afresh is probably changing your name, that is what Shin In Geun, the North Korean refugee thinks. So he is now Shin Dong Hyuk.

Yet he is still a broken persona living layered lives. It will take a long time for him to lead a totally normal life, if he can, in leaving behind the 23 years of his life in the land of the ‘Great and Dear’ leaders.

The multiple layers of secrecy and an insensitive international community have allowed the North Korean government to continue with the camps. These camps exist nowhere in official records of any country. There has been significant amount of work done by activists and journalists like David Hawk and Blaine Harden but why the international community is not acting is frustrating when tens of thousands are being killed every year.

Horror of the North Korean regime flows effectively, from one page to the other, from one chapter to the next – keeping you hooked to book, thinking, is there a limit to all this!

Try it to feel it.