It is 8 years since November 19, 2005 when Manjunath Shanmugam was found murdered in Lakhimpur Kheri district of Uttar Pradesh. He was brutally killed and dumped in his own car by a petrol pump owner and his goons.

And the reason behind it was Manjunath’s honesty.

Body of the young brilliant engineering and management graduate of IIM Lucknow was found riddled with many bullets as he was re-inspecting a re-opened petrol pump he had sealed for three months for selling adulterated fuel.

has become notorious for victimization of activists and social workers who get into direct confrontation with the System to get its anomalies corrected and Satyendra Dubey and S Manjunath are probably the most talked about initial cases drawing wide attention on the need of serious discussion on whistleblower and activist protection in . There is a long list from Satyendra Dubey to to Satish Shetty to Shehla Masood to Narendra Dabholkar if we just talk of the post-2000 period.

Yet, we do not have much to say on the developments in this direction apart from a piece of proposed legislature that, no one can say, when would see the final go and how effective would be. 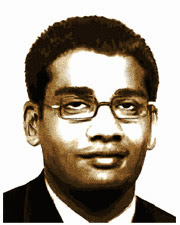 Sometime back, I had written an article while thinking on Manjunath. I found myself seeking answers to some questions that my thinking raised. It’s been some years since then, yet answers remain elusive.

NOVEMBER 19 AGAIN: DID IT ECHO IN YOUR THOUGHTS?

I hope most of us are still aware of Manjunath Shanmugam who sacrificed his life.

Many of us would dismiss that in just one go -- for honesty -- and for human values, values going deeper backstage with each passing moment, and this all is happening in the name of pragmatism.

On 19th November 2005, this IIML grad and sales manager of Indian Oil Corporation was found shot dead in his car in Lakhimpur-Kheri. He was just 27. And for what -- he had raided and sealed some petrol pumps for adulteration. , the teacher of his IIML professors was no more between us.

But what was our responsibility?

Could we adopt even an iota of values of pioneers like Manjunath, Satyendra Dubey, Binayak Sen or Himanshu Gandhi?

A selfless struggle to bring the process of change on the horizon!

Some media reports pegged Naxals’ annual extortion operation at around 1500 crore and see, a Madhu Koda could easily outmaneuver them in just few years of political career.

Who’re mercenaries of debased interests then?

Finding that is getting tougher and tougher. Identities are coalescing and tentacles of vested interests are infesting virtually every area of our social habitat now.

We need the change. We desperately need to save our social habitat. We need functionality of values back. Surely we need messengers of change. We always need to see that the sacrifices like Manjunath and all others do not vanish in the pages of history.