“IF WE HAVE NO PEACE, IT IS BECAUSE WE HAVE FORGOTTEN THAT WE BELONG TO EACH OTHER.” 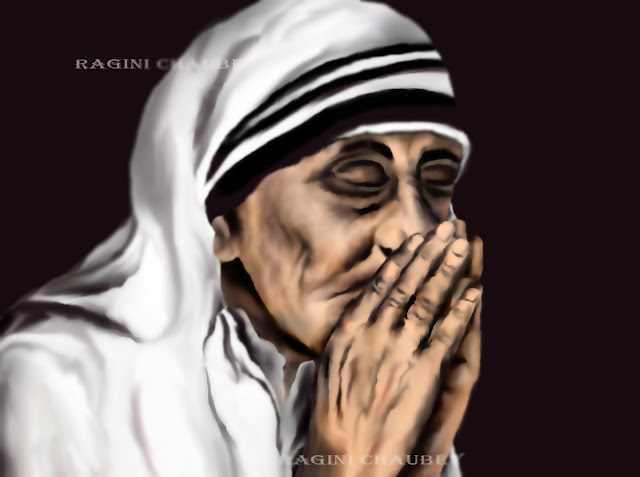 A digital sketch of the Mother by Ragini

“As that man whom we picked up from the drain, half eaten with worms, and we brought him to the home. I have lived like an animal in the street, but I am going to die like an angel, loved and cared for. And it was so wonderful to see the greatness of that man who could speak like that, who could die like that without blaming anybody, without cursing anybody, without comparing anything. Like an angel - this is the greatness of our people.”

These words, they have been like a guiding spirit personified. Being the enlightening words to discipline your life, they always stay with you, making their presence even more personal for you when you find your ‘self’, your ‘soul’ haunted by the elements of darkness.

Like every other life of her stature, her life was her message. She was life personified telling us how and what should be a life.

She once wrote in a letter:

“Often I wonder what does really God get from me in this state — no faith, no love — not even in feelings. The other day I can't tell you how bad I felt. — There was a moment when I nearly refused to accept. — Deliberately I took the Rosary and very slowly and without even meditating or thinking – I said it slowly and calmly. The moment passed- but the darkness is so dark, and the pain is so painful. – But I accept whatever He gives and I give whatever He takes. People say they are drawn closer to God- seeing my strong faith – is this not deceiving people? Every time I have wanted to tell the truth – “that I have no faith” – the words just do not come – my mouth remains closed. – And yet I still keep on smiling at God and all.”

She was strongly religious but she had friends in every religion. She ran a charity, a large one, but despite being a devout Catholic and running a Missionary organization, she was never associated with religious controversies like conversions.

She tells us about good side of every thing. Religion is a good reason but also has nefarious elements of a bad reason. Religion has been and religion is still the reason for the maximum bloodbath in the world. A life like her is the message of the good reason, to see religion as the good reason to follow it as a way of life. It reflects in one of her quotes:

“If we have no peace, it is because we have forgotten that we belong to each other.”

I also love one of the quotes in circulation that I thought was by her but later on came to know that it was by someone else and got popularized after it was found hanging on the wall of Mother Teresa’s workplace. But anyway, it was good, having inspirational value.

Do Good Anyway– “People are often unreasonable and illogical. Forgive them anyway. If you are kind, they may accuse you of ulterior motive. Be kind anyway. If you are successful, you will win some false friends and true enemies. Succeed anyway. If you are honest, people may cheat you. Be honest anyway. What you spend years building, someone could destroy overnight. Build anyway. If you find happiness and serenity, they might be jealous. Be happy anyway. The good you do today, people will often forget tomorrow. Do good anyway. Give the world the best you have, it may never be enough. Give the world the best you have anyway. You see, in the final analysis, it is between you and God. It was never between you and them anyway.”

The website www.motherteresa.org says ‘this is an adaptation of the Paradoxical Commandments by Dr. Kent M. Keith)’.