THEIR COURAGE IS WORTH THOUSANDS OF TALISMANS

Seven of them were in juvenile home of the district Ghazipur of Uttar Pradesh. They were there even though such juvenile homes are meant for minors indulged in criminal activities. Some of them were left there by the police while others were sent by the relatives after their parents were no more. In the course of the time, by a good chance event, the juvenile home saw a good-hearted probationary officer who realized plight of these children and took the initiative to transfer them to some appropriate place. He succeeded when he got positive response from one of the residential schools meant for below-the-poverty-line population. An initiative of the UP government, some +2 level schools have been established with provision of free fooding, lodging and education to the students from the economically weaker sections of the society. Such schools are called ‘Rajakiya Ashram Paddhati School’ (Government Ashram Training School). Ironically, these schools are under direct control of the Social Welfare Department of the UP government, a notoriously corrupt wing. So again it comes to the personal merits and demerits when we go to assess the performance of such schools on a humane scale. Luckily, this Varanasi centre got a good-heart fellow like the Ghazipur juvenile home. He happily agreed to take them in.

Now transferred, they know they have to study hard to get somewhere in life. They know it is their chance. They may be lacking in motivation now but will develop it if they continue to get patronage of a good heart, something we need to pray for and if needed, get actively involved for in the process. While talking to them, their tears bring tears to you but how they handle it to bring that smile back to their faces is worth thousands of talismans that we all need to learn and emulate.


Watch-out this space for more on their stories. 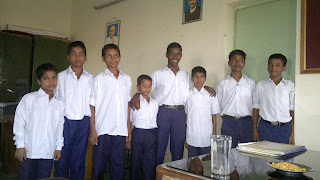 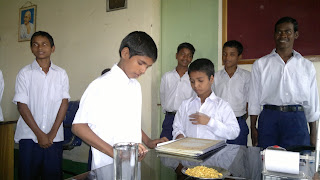 LIFE - COLORES INFINITUM: A column on my blog to share real time stories of real characters – stories that colour life – give it a meaning – give it a thought – without making any visible attempt – without seeking any reason – without seeking any change – they are here to tell the tale – after all, WE ALL ARE STORIES WAITING TO BE TOLD – and we may be our very own special audience. J
Posted by Santosh Chaubey at Wednesday, November 23, 2011