THE IRONY OF NATURAL GETTING SPECIAL

It was a day of positive co-incidents. I would to like share this one. It was a day like any other with a notable differentiator. Some days ago while starting for my work place for the evening shift; I was mentally prepared to yet another round of irritating arguments with some more auto drivers before I could find someone who could ask for somewhat fair fare amount, i.e., Rs 50-55 or if I had the better luck, I could find some autowalla who would give me a paid ride using meter.

But for a pleasant surprise, as soon as I hit the spot where I stand and wait for auto rickshaws, I found one approaching. As usual, I asked whether he would take me to the Jhandewalan. He said yes. A good beginning as most of them say no to go Jhandewalan due to traffic chaos at Azad market and Kamla Nagar. Now I was waiting to negotiate with him on mode of the fare amount. But he said to sit inside and turned the meter on. It made me feel good. So we both started our ride to my work place. He took the wheel control and I let loose control of my mind and senses to read as much of the ethereal as I could, a favourite when I use public transport; to think and to think, about the myriad called life.

The next positive was the traffic was not chaotic that day especially at places like Azad market. So we were on our way. Meanwhile the driver smoked twice. Generally I object to someone smoking near me as I feel uncomfortable by the fume. I was in my thoughts but not so lost that I could not say no the driver but somehow I didn’t intervene, why, I don’t know.

We had covered the most part of the track when suddenly the driver started slowing down and veering his auto to the side. I didn’t bother much as I had ample time at my hand to reach and so didn’t notice it initially.

But, lo, what I see. Instead of stopping his auto, he took it behind a hand trolley which an old-age person was pulling on feet, not able to rotate the paddles. It was upslope of the road near the Idgah and the trolley puller was finding it difficult to pull the 50 Kg+ of the commercial gas cylinder. The auto driver extended the natural yet strikingly humane and touchy gesture. He came very near to the trolley, placed himself in a slanting angle in his driving seat, put his left leg over the protruding edge of the gas cylinder and sped up his auto rickshaw. The trolley puller suddenly felt acceleration. He looked back and without uttering a word, rushed to his driving seat to take control of the direction. 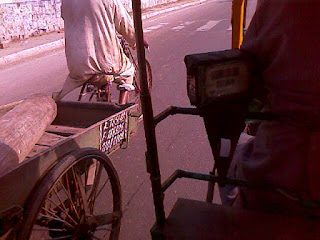 I felt captivated at this beauty of silent communication and spontaneous synapse. My thoughts were quickly re-aligned to such unspoken yet subtle symbolism. I tried to catch the moment but my camera couldn’t catch it properly. I could take some snaps only when the auto rickshaw reached the downward stretch of the road and the auto driver regained his normal driving seat position. He continued driving silently as if he was used to of it and nothing particular had happened. But for me, it was an experience that I do not witness so often in my sphere of life. Even today, I had to go through the grilling process to pick an auto at the New Delhi Railway Station’s prepaid booth even after having the slip and assistance of the traffic police.

Here it is ironical. We have made natural human tendencies special. I know there would be many more people like this auto driver who take these natural ways of life and living just as natural and so don’t go on expressing and reacting on such gestures, be it the giver or the taker.

But we need to accept the uniformity is largely gone or suppressed. We need to think why we have caged ourselves in these narrow by-lanes of dependent and parasitic thoughts. It has left me thinking since then. It was yet another ‘larger than Life yet very Life like’ moment. We have microcosmos of these. We need to have macrocosmos of these. Let’s see if the macro comes here before it is too late. Personally, I have become less skeptical of autowallas after the incident.