I had heard about PRADAN and therefore about Deep Joshi for the first time when I was in BHU for the Mass Communication course. PRADAN was visiting the University for campus placement from the Social Science faculty and they had signaled they would like to visit Dept of Journalism and Mass Communication too. They did visit us. It was during my first year so I was not entitled for it but if I am not wrong, no one from the Dept went on to join though some of the seniors had fulfilled the preliminary placement requirements. One possible reason could be the PRADAN’s clear talks that its training procedure was based in rural India and was highly vigorous and required great commitment and tenacity by the applicant as most of the candidates used to leave the training in first three months only facing their inability to continue with the required commitment. I am not sure about this as it was mostly the word of the mouth publicity, but I would say a positive one. But I was attracted by it, by work of PRADAN and was rather fascinated with PRADAN’s founders, the highly qualified professionals, who introduced social entrepreneurship in India. PRADAN has maintained the credibility of being a thoroughly professional organization that hires professionals from top-notch institutions like IIM and has been one outstanding contributor to the Development sector in the country. 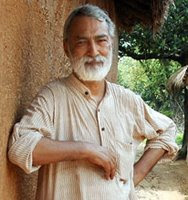 So it was just a confirmatory news when a Ramon Magsaysay was announced for Deep Joshi, the humble identity who already has spent 30 years working to bring positives to the real India. A Magsaysay to him is also a revisit to the thought process that was initiated in me after a Magsaysay to Sandeep Pandey. Pandey belonged to the most elitist institutes in its class, Florida Institute of Technology and IIT Kanpur, and then moved on to rekindle his spirit for an ordinary Indian. Deep is in the same league. A Masters in Engineering from the MIT and a Masters in Management from the Sloan School, MIT, Joshi has worked for the Ford Foundation, and is a known name in rural development, sustained livelihoods and poverty alleviation works. Development sector in India has very few names like Joshi and Pandey and it raises the natural question, what is stopping them? Probably most of us, the furnished professionals, are not ready to understand or realize the intellectual challenge that one would face if she or he decides to take a dip in these turbulent waters as most of the time she or he would be facing the state to be acting like an opponent. And probably this is the biggest reason, excluding a hoard of others, to choke flow of the intellectual capital to the Development sphere. But fearlessness is the only supplementary virtue that one needs to have if someone has to work for a ‘process of change’. What we need is a synergy of such a fearlessness with intellectual capital and commitment to a ‘cause’. Joshi says, "Development work is considered intellectually inferior, unlike high science, industry or diplomacy. We want to prove that it is both a challenging and a noble choice.”
Posted by Santosh Chaubey at Monday, August 03, 2009